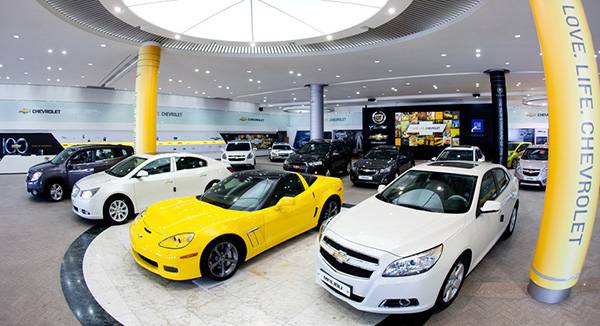 Vehicles developed and manufactured by GM Korea are on display at its plant in Bupyeong, Gyeonggi. The automaker celebrated its 10th anniversary as the local unit of General Motors on Thursday. In the course of the last decade, it has released 34 new vehicles. Provided by the company


General Motors (GM) is reportedly moving to take full operational control of its Korean unit by buying out the stake held by Korea Development Bank (KDB), a state-owned financial entity.

GM currently owns just over 70 percent in GM Korea, but its management plans and strategies can still be shot down by KDB, which ranks as the second-largest stakeholder with a 17 percent interest.

Tim Lee, president of the U.S. auto giant’s international operations, arrived in Seoul yesterday to meet with KDB Chairman Kang Man-soo. Although details of the meeting were not disclosed, industry insiders suspect GM is angling for KDB’s entire stake to effectively kill off the Korean government’s power to veto its decisions.

Lee’s arrival is considered timely as GM Korea celebrated the 10th anniversary of GM becoming its majority shareholder on Wednesday.

If KDB decides to sell its stake, the U.S. automaker will gain full control of Korea’s third-largest automaker for the first time since it took over Daewoo Motors at a time when the latter was on the brink of bankruptcy.

Allowing KDB to step in and meddle with GM Korea’s managerial decisions was a safety mechanism implanted by the government in case the U.S. automaker were to proceed with risky investments or other moves that could jeopardize the company and put its employees at risk.

For GM, however, it presents itself as a major obstacle and the two sides have clashed in the past.

The most recent dispute erupted two years ago. In late 2009, GM Korea was trying to raise capital by means that KDB refused to consent to. The Korean banking group also threatened to call back its loans in a bid to apply more pressure.

GM Korea was squeezed for cash having just lost $2.6 billion on a currency hedge gamble during the 2008 financial crisis, including $2 billion of credit from KDB.

The company asked KDB to roll over the obligation and extend the line of credit, but it refused. GM Korea responded by issuing more shares to raise capital which diluted the bank’s stake from 28 to 17 percent. To resolve their difference, the current system was proposed by Lee and accepted. Under their agreement, GM cannot sell more than 5 percent of GM Korea’s assets without the consensus of KDB.

However, market experts said the U.S. automaker has become increasingly desperate as the deepening global recession takes its toll on the global industry.

According to a recent report by the Korea Automotive Research Institute, which operates under the wing of Hyundai Motor, the global automotive market will grow 3.4 percent in 2013, down from a forecast of 5.9 percent growth this year and 4.8 percent in 2011.

The report noted that growth is decelerating in the second half of this year, adding that China and Brazil are also likely to experience a cooling off next year.

But for GM, its Korean unit has been performing better than most others in the group. Its research center in Bucheon, Gyeonggi, has also served as GM’s main strategic base for the development of the Spark.

Whether KDB agrees to part with its stake remains to be seen as the government has expressed strong interest in keeping the company here. If it sells, there would be nothing stopping it from packing up and leaving, and rumors to this effect have swirled since the two sides fell out in 2009.