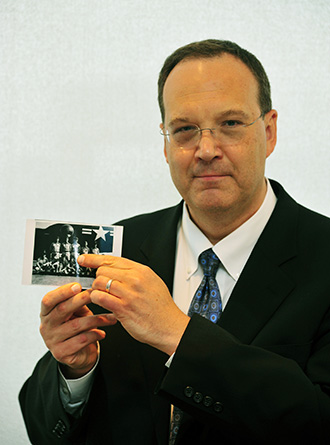 Kenneth Carl points at a photo of his father in uniform taken during the 1950-53 Korean War. Carl is a lawyer working for Sheppard Mullin Richter & Hampton LLP, a California-based international law firm that set up business in Korea last month. Provided by Sheppard Mullin

Sixty years ago, John Carl fought in the Korean War as a member of the United States Air Force. Based in Okinawa, Japan, Carl flew more than 70 times on a B-29 Super Fortress, a propeller-driven heavy bomber, and saw one of the last operations in the war-torn country right before the armistice was signed.

Carl’s connection with the Korean Peninsula didn’t end after the active stage of the war. He frequently visited the poverty-stricken country and told his son, Kenneth Carl, about the warmth and kindness he felt from the Korean people.

His son now frequents the country as a lawyer working for Sheppard Mullin Richter & Hampton LLP, a California-based law firm employing over 600 attorneys with 16 offices around the globe. Sheppard Mullin is one of the first foreign law firms to open an office in Korea as a result of the Korea-U.S. free trade agreement.

Kenneth Carl’s experience working with Korean clients began 13 years ago when he was tasked with providing legal consultation for the Korea Development Bank. But stories and photos of his father’s experiences in the Far East date back much further.

“One of the pictures I remember is the picture of Busan in black and white taken from 20,000 feet above ground on the plane during my father’s mission, which he showed me when I was 4,” says Carl, who graduated from Harvard Law School in 1985.

“He also showed me pictures of a fish market in Busan that he took during his visit there, which I found very fascinating and remember to this day. So after I came here, I headed to Busan remembering the photos he had shown me.”

Carl planned on visiting Korea more than 10 times and said during an interview with the JoongAng Ilbo that he was very eager to see the country. Since Sheppard Mulin opened its regional office in Seoul, Carl now flies across the Pacific to Seoul for business at least four times a year.

Carl’s legal firm has signed a consultation contract with local entertainment firms looking to make their way into the U.S. market through mergers and acquisitions.

With legal expertise in banking law, Carl came to Korea late last year for the first time to prepare for the opening of the office. He visited the country again earlier this month on his fourth trip for the official launch.

“I’m thoroughly delighted and honored to work with Korean clients,” he says.