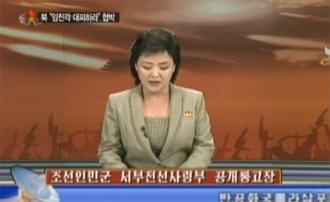 “The moment a minor movement for the scattering is captured in Imjin Pavilion and in its vicinity, merciless military strike by the Western Front will be put into practice without warning,” the North’s Korean Central News Agency (KCNA) quoted the Western Front Command of the (North) Korean People’s Army as a warning in an English-language dispatch.

Sending such leaflets is “an unpardonable challenge to the army and people of the DPRK, and a deliberate act aimed to push the North-South ties to the lowest ebb,” KCNA said, referring to a plan by a group of North Korean defectors living in South Korea to send anti-North campaign leaflets on Oct. 22 from Imjin Pavilion, just south of the western inter-Korean border. DPRK stands for the North’s official name, the Democratic People’s Republic of Korea.

Anti-North activist groups here, often composed of North Korean defectors, regularly send balloons carrying anti-North leaflets along with gifts such as U.S. dollar bills over the border to the North as part of their campaign against the dictatorship.

The KCNA also warned that “South Korean inhabitants at Imjin Pavilion and its surrounding area are requested to evacuate in anticipation of possible damage,” proclaiming the Imjin Pavilion in the border city of Paju, the location of frequent leaflet sending, to “become targets of direct firing from now.”

The North said it will not overlook such provocative actions, which it said amounts to “an undisguised psychological warfare.”

In response, the South Korea’s Defense Minister Kim Kwan-jin made clear that any attacks will be met with immediate retaliatory fire.

“If such provocation takes place the South is fully prepared to take out the source of the attack,” the official said in a parliamentary audit session.
He pointed out that the North had said last year that they will strike places used to send propaganda leaflets and South Korea has already made clear that such action will require it to destroy the origin of the attack.

Kim said an alert has already been issued along the western front, which is guarded by 1st Corps, and troops are ready to react if the need arises.