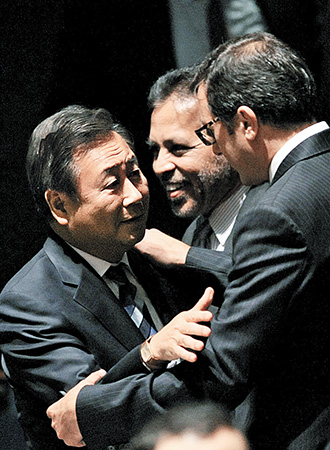 Kim Sook, left, South Korea’s ambassador to the UN, is congratulated after the country was elected as a new non-permanent member of the United Nations Security Council in New York on Thursday. [YONHAP]

South Korea regained its status as a non-permanent member of the United Nations Security Council on Thursday after garnering more than two-thirds of the votes in a contest against Cambodia and Bhutan.

It is the second time that South Korea has been elected as a member of the UN’s most powerful committee - 15 years after its first experience from 1996 to 1997 - allowing the country to become more involved in handling global security challenges, including issues regarding North Korea and Northeast Asia.

“The selection comes as the international society has acknowledged and evaluated South Korea’s contributions in international peace and security,” said Kim Sung-hwan, the minister of foreign affairs and trade, yesterday, in a briefing held at the government complex in Gwanghwamun, central Seoul.

“Since Korea’s economy has grown and increased its international activities in the last 15 years, we will offer contributions to international society with great responsibility.” 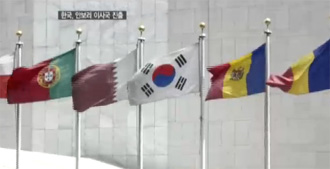 On Thursday in New York, 193 UN members cast secret votes to elect new non-permanent Security Council members as five of the 10 seats are renewed every year.

For the seat assigned to the Asian region, South Korea competed with Cambodia and Bhutan.

In the second round of voting between Korea and Cambodia, 149 members voted for Seoul, sealing the victory. Four others were elected from other regions: Australia, Rwanda, Argentina and Luxembourg. The five permanent, veto-wielding members are the United States, China, France, the United Kingdom and Russia.

Korea’s new status as a UN Security Council member comes at a time when there is growing tension on the Korean Peninsula over a leadership change in Pyongyang.

There are concerns that North Korea may carry out a third underground nuclear test after its launch of a long-range missile failed in April.

Speculation has been growing that North Korea appears to have completed preparations for its third test.

“We are now part of a strong council that has legally binding force to establish a resolution with UN member countries in case of urgent situations, including the North’s provocation,” said an official from the Foreign Ministry.

Kim also said, “I think we have secured a significant portion of deterrence against North Korea as South Korea was elected as a non-permanent member of the UN Security Council.”

The Blue House also welcomed the voting result, calling it a reflection of Korea’s enhanced international profile and pledging to work harder for peace on the Korean Peninsula and beyond.

“[The election to the council] is the fruition of our diplomatic capabilities hardened through hosting a Group of 20 summit and the Nuclear Security Summit, and reflects our heightened international status,” said presidential spokesman Park Jeong-ha yesterday.