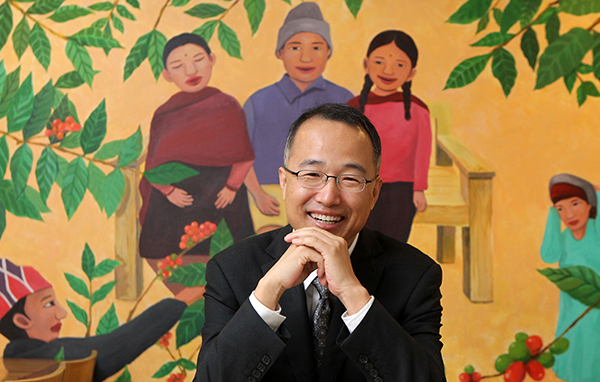 Lee Ki-dae, executive director of the Beautiful Store, a nonprofit organization that sells second-hand items at low prices to raise money for the underprivileged, sat down for an interview with the JoongAng Ilbo in Anguk-dong, central Seoul, to talk about the group’s 10-year anniversary. By Kim Do-hoon


After the first Beautiful Store opened in 2001, the idea caught on like wildfire and spread throughout the country. Relying heavily on volunteers, the nonprofit has been one of the outstanding models of philanthropy in the country.

The organization is celebrating its 10-year anniversary, and Executive Director Lee Ki-dae, who joined the group in June, says he is promoting financial independence to ensure the longevity of the initiative.

Beautiful Store runs charity shops that sell second-hand, recycled items at very low prices to raise funds for the underprivileged. The stores receive donated materials and clean and repair them before putting them on sale.

Lee says he is set to improve the management index for the corporation because the current standing of social enterprises in Korea shows financial vulnerability.

“Just as Korea’s venture companies tend to collapse sooner or later when the outside investment stops coming in, social enterprises have followed similar paths.”

Lee says he once accompanied and learned from Bill Gates of Microsoft when he was working for the company’s Korea unit in 1997.

“I learned from Bill Gates the value of running a flat organization, as he made everyone feel comfortable [by asking others] to call him Bill,” Lee says. He has thus sought to make high-level managers more approachable for regular employees.

Lee has built up some background in business management at companies in Korea and overseas. He studied computer science at Hanyang University and the State University of New York, Buffalo, before returning to Seoul to work for Microsoft.

In 2001, he moved to the United States to work in Silicon Valley and then again took on a new project as a CEO of a hotel.

After years of building up his business reputation, he was chosen as the executive director of the nonprofit Beautiful Store through a public offering in June. He is the first outsider to be appointed to such a position.

He says it was his “basic instinct” that urged him to give up his life as a high-level businessman and to jump into leading a social enterprise.

“I have benefited from the system we have in our society,” Lee says. “I feel it’s time for me to give something back to society.”