Fancy some flowers this fall? Mum’s the word

Fancy some flowers this fall? Mum’s the word 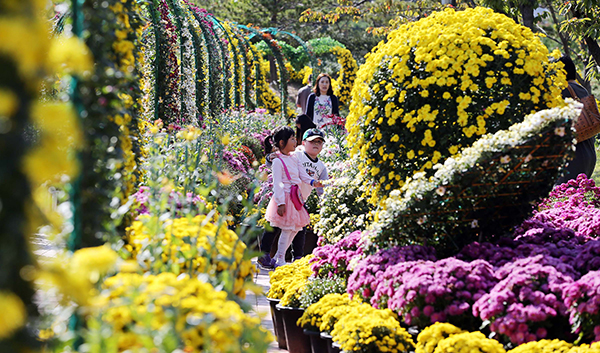 Daejeon’s Yurim Park seeks to offer a diverse view of chrysanthemum art in a variety of designs, from the Eiffel Tower to windmill to the shape of the Korean peninsula. [YONHAP]


A series of chrysanthemum festivals are set to burst into full bloom this week and transport fans of the flowers to a world of many-hued blossoms.

For those who live in Seoul, the World Trade Center Chrysanthemum Festival at COEX, southern Seoul, is one of the few mum fests held in the capital city.

The convention center features 350 varieties of chrysanthemums - 100 million flowers in all, according to the organizers - trained into unique designs inspired by various themes, such as K-pop, IT and Korean tradition. In front of each display is a photo zone where visitors can have their pictures taken amid the glorious surroundings.

And there’s more to the World Trade Center Chrysanthemum Festival than just flowers. Entertainment and other events are scheduled throughout the 31-day festival that started last Monday. A special exhibition titled “Seoul Project 2012” shows off flower-themed sculptures, paintings, photographs and prints. Festival organizers also have a lineup of classical music and jazz concerts scheduled this weekend.

And jumping onto the “Gangnam Style” bandwagon, there will be street performances in Gangnam district next Thursday and Friday. COEX’s chrysanthemum festival attracted 550,000 visitors last year, many of them from China and Japan, according to an organizer.

“We expect the festival to draw more than a million visitors this year because COEX has been included in the ‘Gangnam Style Tourism Belt,’ along with Bongeun Temple, Kukkiwon (the world Taekwondo headquarters), Garosugil and Seoul Arts Center,” said a trade center representative. 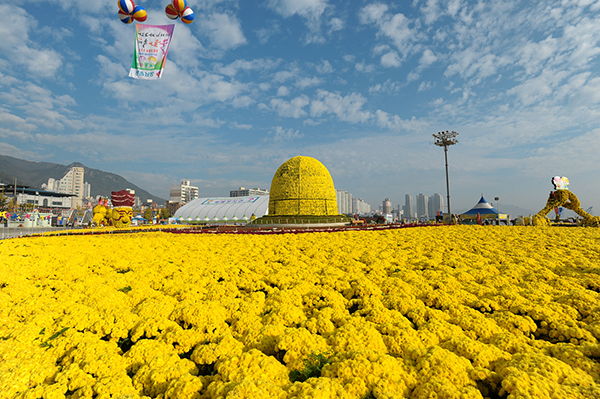 The Gagopa Chrysanthemum Festival is known for cultivating 1,315 chrysanthemums on a single stem. Provided by Changwon City


If you are fed up with bustling Gangnam and Seoul in general, why not head to less-crowded Changwon in South Gyeongsang, site of the 12th Gagopa Chrysanthemum Festival.

Changwon City (population1.08 million) may be a lot smaller than Seoul, but some big things happen there during the mum festival. In 2009, the festival was recognized by the “Guinness Book of World Records” for producing the “most chrysanthemum blooms on a solitary stem.”

The achievement is made possible thanks to the horticultural expertise of Jeon Jeong-su and his 300 assistants from Agricultural Profession Place of Masan municipality. From July 2008 to October 2009, Jeon and his team cultivated 1,315 chrysanthemum buds in a single stem. The resulting plant was 2.8 meters (9 feet 2 inches) wide and 2.4 meters tall, and weighed 300 kilograms (661 pounds).

This year, Gagopa Festival is shooting for 1,414 blooms on one stem.

Along with the signature attraction of the 10-day event that starts next Friday, 90,000 other mums will be on display.

Masan is a major commercial producer of chrysanthemums and cultivates about 10 percent of Korea’s production.

This year, the Gagopa Chrysanthemum festival plans to offer instruction events and set up a booth to sell mum-related products. The main exhibitions are displayed under various themes, such as Korea, the world and Changwon.

Those who want to see mums in unusual surroundings should check out the Dream Park Chrysanthemum Festival, which runs through tomorrow. Once used as a landfill, the festival covers 860,000 square meters (210 acres), or 120 times the size of a soccer field and almost two and half times bigger than Yeouido District. The festival features about 52,200 works decorated with chrysanthemums and other plants, including cosmos flowers, wildflowers and grass. 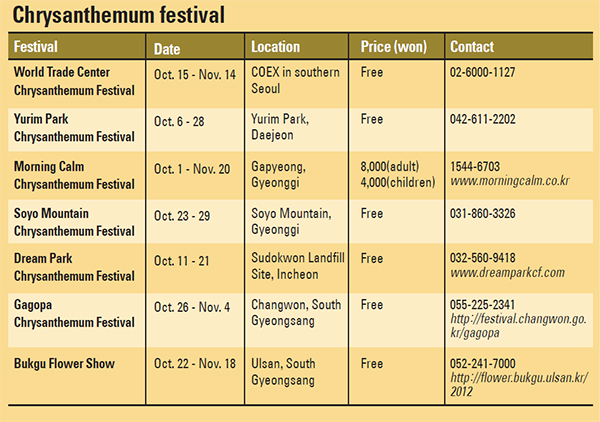 The Dream Park Festival is an environmentally friendly theme park that sits on what was once barren wetlands. It took four years to complete the park as part of a conservation project, and the effort appears to have paid off: Last year about 280,000 people attended the festival, and organizers estimate 500,000 people will visit this year.

The landfill-turned-park holds a variety of programs for children offering hands-on educational activities about ecology, rafting, traditional crafts, elephant training and flower art. There also will be music performances.

Sudokwon Landfill Site Management, the host of the festival, plans to send 5,000 works made of the mums to the Kaesong Industrial Complex in North Korea next Monday at the request of workers there.

Visitors to the Soyo Mountain Chrysanthemum Festival will see not only colorful flowers, but beautiful leaves as well. The autumn reds, browns and yellows in Soyo Mountain are near their peak. With 3,218 mums on display, the festival will offer free chrysanthemum tea throughout the seven-day event scheduled to get under way Tuesday.

In Daejoen, the Yurim Park Chrysanthemum Festival uses mums in sculptures of various designs, from the Eiffel Tower to a windmill to the shape of the Korean Peninsula. For young visitors, there are also mum hearts, stars, butterflies and tigers. The Yurim Park festival runs through next Sunday and will feature 200,000 mums, including 35,000 potted chrysanthemums.