The three lead actors - from left, Brad Little (Phantom), Claire Lyon (Christine) and Anthony Dawning (Raoul) - pose at the press conference for the upcoming musical “The Phantom of the Opera” in central Seoul on Thursday. [YONHAP]


It has only been one year since the musical was last in Korea, but 90 percent of the tickets for Andrew Lloyd Webber’s “The Phantom of the Opera” have already been sold. The show returns to Seoul this winter to celebrate its silver anniversary on Broadway.

Seol & Company, the organizer, says this is a “testament to the popularity of the longest-running show in Broadway history among Koreans.”

The three main member of the casts who form the “Phantom triangle” - Brad Little, Claire Lyon and Anthony Dawning taking roles of the Phantom, Christine Daae and Raoul, respectively - visited Seoul last week prior to the show’s two-month-long run.

They held a roundtable interview with the press on Wednesday in central Seoul. 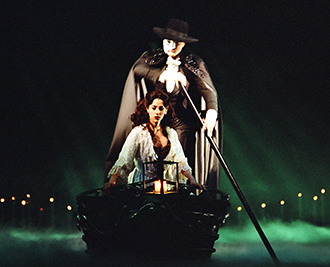 A scene from the musical “The Phantom of the Opera” with Christine and the Phantom on a boat. Brad Little and Claire Lyon will play the roles in this winter’s run at the Blue Square, Samsung Hall. Provided by the organizer

According to the three actors, the Korean audiences will “see something very different” from previous “The Phantom of the Opera” musicals as the three main leads are from three different countries, which will make the musical more dynamic.

Little is American, Lyon is Australian and Dawning is South African.

“We have so much to offer as our backgrounds are so different,” said Lyon. “We’ll bring our own interpretations of the character so it will be a totally different story to tell.”

A lot in Little

It’s been seven years since Brad Little - the fourth longest-running Phantom - last came to Korea as Phantom. He said that he can’t find words in English or Korean to describe how excited he is to be performing on the peninsula again.

Little said he remembers seven years ago performing in Seoul as a time when he first experienced what it’s like to be “hit by a wall of sound.”

“The curtain call that came from the audience, I almost felt like my hair was blown back by the sound,” said Little, who added that “the people” are the reason why he keeps talking about Korea and wanting to come back.

“They are truly what keeps the theater alive in Korea.”

The actor has attracted more than 15,000 fans in Korea since his performance as the Phantom seven years ago.

After building a following in Korea, Little started an account on Cyworld, a Korean social networking service that was as popular as Facebook a decade ago, to better communicate with his fans.

But the actor said he “doesn’t use [the account] as much anymore,” but is now more into “KakaoStory,” a photo sharing social networking service for users of the KakaoTalk smartphone application.

“I treat my Korean fans much differently than any of my fans in United States. I give them much more time and respect,” Little said.

It was 1996 when he first performed as Phantom on Broadway in New York. He said his first “Phantom” experience was like “being a bullet shot through the script,” as it went by so quickly. The actor has now played the role more than 2,200 times.

But the veteran said the first show in Seoul will be the very first time that the three leads will be performing together.

“It’s funny because I know over half of the members in the company and I’ve worked with them previous times, but I am the rookie with these two guys because they’ve been performing together in the Philippines and I am the new one coming in,” said Little, who warned the other two cast members to “get ready” as he doesn’t “generally like doing the same thing twice.”

“Phantom is a really difficult role to ruin. You have to really try hard to be a bad Phantom because there are so many ways you can play this role and none of them are really wrong. You can play him angry, sympathetic or pitiful. You can just go on with so many adjectives in how to play this character, and they all work. You don’t find this kind of role often.”

Lyon, the 25-year-old Australian actress, says she’s “lived the life of a Christine.”

“I feel like my career has been very similar to what Christine’s is on stage. I started off learning classical ballet from the age of 3 and did that for 15 years. Then I started studying music and started off professionally working with the national opera company in Australia. It’s exactly what Christine does. She starts off as a ballerina and then becomes an opera star.”

Lyon says she first saw the musical when she was 5, but two years before that she felt that she “wanted to be like Christine.”

“When I was 3, my mother and I played the songs in ‘The Phantom of the Opera’ on our piano and listened to cassette tapes of Sarah Brightman singing,” Lyon says.

“I just remember listening to the music and looking through the pictures of Sarah in amazing dresses - I remembered Christine has nine different costumes - and I just knew that this was something special. I wanted to be like Christine and like Sarah.”

Lyon is the first actress to play Christine in both “The Phantom of the Opera” and the sequel “Love Never Dies.”

“Christine in ‘Love Never Dies’ is about 28 years old, with a 10-year-old son. So obviously in ‘Love Never Dies,’ she’s more mature and more worldly in a way. But in ‘The Phantom of the Opera,’ I have to start out as a lot more naive and grow into a woman.”

Although Christine leaves with Raoul on stage, Lyon says she would “desire having the passionate relationship” that the Phantom could offer.

“Christine as a character, she goes with Raoul, which I suppose is a very conventional relationship. He can offer her security and a normal life, whereas Phantom would give her more passionate love.”

One year ago, Dawning was studying for his final exams at university. A year later, he’s halfway across the globe as Raoul, a role that he has wanted to play as soon as he saw the musical seven years ago.

“When I watched the show for the first time seven years ago, it blew me away entirely. And now being part of this spectacular show is wonderful.”

The 27-year-old musical actor who is also a composer said the song “All I Ask of You” in the musical is what drew him to the performance.

“My father was a musician as well and when I was 5 or 6 he used to play the song,” Dawning says. “I fell instantly in love with the song and I started learning how to play it on the piano.”

Dawning described the audition process for Raoul as a day that was “meant to be.”

“I wasn’t going to audition for ‘The Phantom of the Opera’ because I was still finishing off my degree. But three months later, I heard that they were still looking for Raoul so I decided to go for it. And I got it.”

If he get’s the chance, Dawning said that he wants to give Raoul, the character, “more depth.”

“Raoul is an arrogant person of a privileged lifestyle, but is slightly weak. He thought he knew everything but he’s quite ignorant in regards to love.

“But I want to portray him as a man with more depth to show the audience and Christine that he can show genuine love for her. It will increase the dynamic of the love triangle.

The flagship London production, which opened in 1986, celebrated 25 years in October of last year at the Royal Albert Hall. The Broadway production will then celebrate its 25th anniversary on Jan. 26 of next year, becoming the first-ever Broadway musical to do so.

The show has won more than 60 major theater awards including seven Tony Awards in 1988 and three Olivier Awards in the West End. More than 40 million copies of the original cast recording has been sold worldwide, making it the best-selling cast recording of all time.

According to the three leads, “The Phantom of the Opera” still appeals to so many people for a number of reasons.

Lyon said that it’s “the love story, the choice Christine has to make between the two men and the theme of rejection and loneliness that the Phantom feels” that consistently draws people to the show.

“These elements happen in people’s lives and it can really touch them and help them relate to the show. That’s why the audiences are not disappointed even though it’s their 10th time watching it.”

Dawning also agreed and said “every human being on this planet who has reached a certain age would have experienced falling in love for the first time, like Phantom does for Christine, and losing someone very close to you, as Christine loses her father in the musical.”

Little, meanwhile, said that the visual aspects - the set, costumes, props and makeup - are what attract international audiences.

“I have done shows in Asian countries where English is not a first language, and in these countries it doesn’t matter if they don’t understand the musical in English. They still feel it. And you don’t get that a lot from a musical.

“When people see it for a second time, they see something different, and when they come the third time, they still see something else that’s different. They think we’ve added new songs or new scenes, but we haven’t. It’s amazing how much you pick up every single time you see the show.”