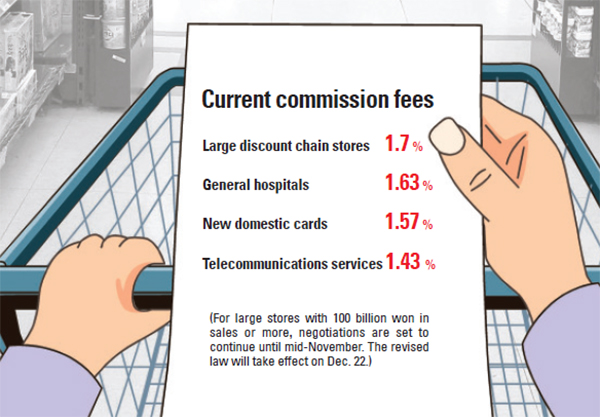 It seems as though the battle between credit card companies and large discount chain stores may flare up again as they have butted heads on the issue of commission fees just one month before they are due to negotiate on the matter.

While the large discount chain stores warn that higher commission fees will drive up inflation, credit card issuers are still planning to go ahead and raise their rates.

“Raising commission fees is inevitable as we have to do this to survive, although we expect to meet resistance,” said an employee at Hyundai Card.

This has already eaten into the profits of card issuers, who have decided to make up the shortfall by charging large merchants more. This will be law enforced starting Dec. 22.

But large retailers are opposing the move, saying they will switch over to using a rival service if their current issuer ups its rates.

The financial authorities have begun pressuring the card companies and their member stores to come to an agreement one month before the rates are due to be changed.

The monetary authorities say a hike is inevitable to level the playing field and make it fairer.

But as retailers can put up resistance by taking advantage of their large sales and threatening to defect, small card companies are avoiding negotiations due to their lack of bargaining power.

“Small- and medium-sized card companies are walking on eggshells as it is difficult for them to even raise the issue of raising their rates,” said an employee at Lotte Card. “We don’t expect they will strike a deal until after they see how large credit card companies fare.”

The credit card industry said it hopes to work with the various issuers to determine the new rates in one swoop and send out an official notification early next month, thus negating the threat of defecting to rivals.

Large discount chain stores posted sales of 37 trillion won nationwide last year, with credit card payments making up 28 trillion won of the total. They say that even a 0.3 percentage point hike in the commission rate would result in lost profits of 85 billion won.

Homeplus, the nation’s second-largest discount chain, is among those that have reportedly already sought legal advice as they prepare to take action against the credit card companies.

“Due to the growing competition among credit card companies, their marketing costs spiraled up to 4.3 trillion won in 2010,” said Koh Sang-beom, official at the KOCA. “If they reduce these costs, they will be able to keep their profits without having to raise their commission fees.”

Large discount stores warned that consumers would end up suffering from a raise in rates as the stores would be forced to mitigate some of their losses by increasing product prices.

Lee Tae-kyu, a research fellow at the Korea Economic Research Institute, said the government was mistaken in trying to resolve the matter by mobilizing the National Tax Services and Fair Trade Commission

“The rates should also be determined by the market and the status of the trading partners,” said Lee.