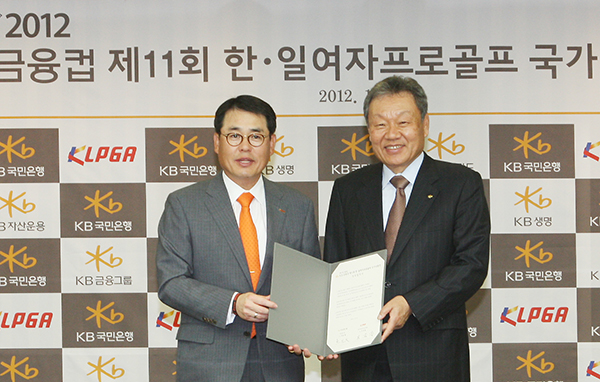 The women’s national curling team also gets sponsorship from the group, having become a member of the KB Financial family in February, and advanced to a semifinal for the first time in the World Championship in March.

Given the group’s tendency to pick winning athletes, it has drawn increased attention. Now, KB is taking aim at golf.

“Golf is a popular sport which comes from the game fishermen in the east of Scotland played with pebbles and sticks,” Chairman and CEO Euh Yoon-dae said. “As the number of serious golf players in Korea has reached 2,600,000 and 27 million people play casually, it is undoubtedly one of the most-loved sports in Korea at this moment.”

“KB Financial Group, as a leading financial group, will help expand the field for Korean golf players who are spanning the world and contributing in golf and other sports while also boosting national prestige,” he added.

The event offers a total of 700 million won ($634,632) in prize money, including a 140 million won prize for the winner. It is the largest of the three competitions remaining in the season.

Since the top player at the event stands to earn more points than possible at the two other competitions, the KB-sponsored event is important for players looking to become KLPGA top player and rookie player of the year. Prize money is at stake, so the golfers are expected to be at their best.

Top-ranked Kim Char-young will participate along with Kim Ha-neul, Hur Yoon-Kyung and Yang Su-jin, who are ranked from second to fourth place. Yoo Sun-young, the winner of the Kraft Nabisco Championship, a major LPGA game held in April, will also participate.

This year, many are interested in the performance of last year’s winner Yang Hui-yeong, a golfer supported by KB Financial Group. Yang will once again be looking to win the 1.5-kilogram pure silver champion trophy.

In December, another event, the Korea-Japan Women’s national golf team competition, will be held with KB support.

At the KB Financial Group Cup 11th Korea-Japan Women’s National Golf Team Match Play Competition, 26 of both countries’ top golf players will participate, including Choi Na-yeon, Shin Ji-yai and Yang Hui-yeong. The prize money for the event totals 61.5 million yen ($775,000), including a top prize of 39 million yen. The game kicks off at Busan Bayside GC for two days on Dec. 1.

By supporting the Korea Golf Association, the group is helping raise the prominence of female amateur golfers and is hosting the KB Financial Group Women’s Amateur Golf Championship in Gangwon in July.

This event, which is held yearly, started in 2007 and has led to the discovery of Ryu So-yeon, the winner of the U.S. Women’s Open in 2011, and other top players.