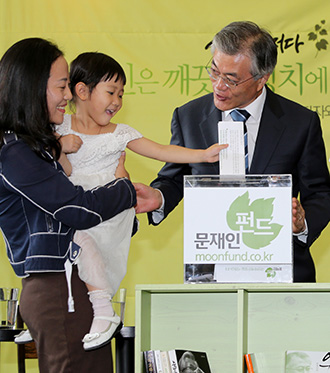 DUP presidential candidate Moon Jae-in, right, receives an investment contract from supporters yesterday at Donggyo-dong, central Seoul, in which he promises to pay back donations after his campaign costs are reimbursed.[YONHAP]

A group of Roh Moo-hyun loyalists resigned yesterday from the presidential campaign of Moon Jae-in responding to growing pressures for political reform in the opposition Democratic United Party.

Nine key associates of Moon, all of whom served in the Roh Blue House, issued a joint statement announcing their resignations. The DUP candidate served as presidential chief of staff for Roh, and complaints have mounted recently that the Roh loyalists were dominating the campaign.

The move coincided with Moon’s launch of a political reform committee as a first step to persuade independent Ahn Cheol-soo to negotiate to field a single, consolidated liberal candidate in the Dec. 19 presidential election against the ruling party candidate Park Geun-hye.

Announcing their decisions to give up all titles in the campaign while promising to continue supporting the DUP candidate, the nine men said they were branded as “pro-Roh.”

“We have never been embarrassed to have served President Roh and worked for his administration,” they said in a statement. “We will continue to feel this way.”

They said they are more than willing to step down from the campaign if it helps reconciliation within the DUP. “We strongly hope our resignations will serve as the end of factionalism between the pro-Roh group and others,” they said.

Moon yesterday said he was grateful for the nine men’s “sincere and loyal” move, calling their resignations a stepping stone to a new era of politics. It remains to be seen if the resignations bring an agreement closer with liberal rival Ahn. With less than two months left before the election, liberal voters are still split between the two contenders while conservative voters are united behind the Saenuri Party’s Park.

In a daily survey by Realmeter, Ahn continued to beat Moon in a hypothetical runoff. On Oct. 15, Moon scored 39.2 percent, while Ahn was backed by 40 percent, but on Friday, Moon’s rating was 33.7 percent, while Ahn’s figure jumped to 45 percent.

Moon yesterday also announced the formation of a 16-member political reform committee but left the chairman post vacant. “We could not find a proper person,” said Jin Sung-joon, spokesman for Moon’s campaign. “Moreover, we decided to keep it empty to complete the committee jointly with independent candidate Ahn.”

Political reform has been a key word for the DUP candidate after Ahn made it a precondition for any negotiation to consolidate candidacies. Ahn, however, did not say specifically what he expects Moon and the DUP to do to reform.

“If Ahn replies positively, we can jointly find a committee chairman,” Jin said. “But if Ahn rejects us, we will just have to find an appropriate person on our own.”

A special committee on anticorruption was also created under Moon’s campaign yesterday.

“Starting tomorrow, we will announce political reform measures of the DUP one after another,” Moon said yesterday. “We promise to meet public expectations.”