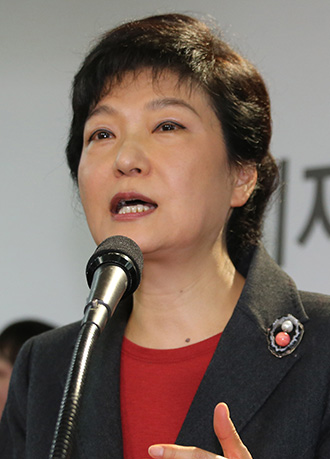 Ruling party presidential candidate Park Geun-hye yesterday made another move to shed her family’s historical baggage by insisting she has nothing to do with a controversy surrounding a foundation established during the authoritarian rule of her father, strongman Park Chung Hee.

In a press conference aired live nationwide, the Saenuri Party’s candidate talked about her position in the scandal involving the Jeongsu Scholarship Foundation and the opposition party’s political attacks over it. The foundation, set up with confiscated assets of a Busan-based businessman in 1962 and chaired by Park herself from 1995 to 2005, has emerged as the latest Achilles’ heel in her campaign.

The foundation is currently chaired by Choi Phil-lip, who served as a secretary to Park in the Park Chung Hee Blue House. Although she no longer holds a position in the foundation, the Democratic United Party argues that she is connected to it through Choi.

Stressing that the foundation is a public charity free of corruption and that she has no ties to it any longer, Park criticized the opposition for using it to attack her. She also denied accusations that the foundation was involved in political scams to support her.

“If the current board members are corrupt, they must resign,” Park said. “But it is wrong to demand their resignation just because they are close to the founder.”

Park said she is in no position to give orders to the foundation and its board since she resigned as chairwoman in 2005. She, however, asked the foundation to clear up the public’s doubts.

“It’s been a long time that my father tried to help poor students and that I resigned from the foundation,” Park said. “I hope the board will make appropriate decisions including a change of the foundation’s name.”

Yesterday, Park stressed that the foundation was created with assets not only belonging to Buil but also other patrons from around the country. She said that the original founder of Buil, Kim, surrendered his assets to avoid punishment for corruption.

In 2007, the truth commission under the Roh Moo-hyun administration concluded that Park Chung Hee regime forced Kim to surrender the foundation. Kim’s family filed a lawsuit to recover the assets, but the Seoul Central District Court ruled against their request last February. The court said Kim surrendered his stakes under the coercion of the Park Chung Hee government in 1962, but the handover of the assets cannot be nullified because it was hard to say that the coercion was strong enough to completely deprive Kim of his decision-making power.

When asked her view on the ruling during the press conference, Park stubbornly insisted several times that the court had already ruled that the seizure of Kim’s assets were not coerced by her father’s regime. Shortly after the press conference wrapped up, Park addressed reporters once again to correct her remarks. “Did I say that there was no coercion?” Park said. “I think I made a mistake.”

The opposition DUP quickly condemned Park for her “poor understanding” of the matter and demanded an apology.

“Because she is interpreting everything with her father at the center, she sees a forcible seizure as a contribution and stolen property as a gift,” said Jin Sung-joon, spokesman for the DUP candidate Moon Jae-in’s campaign. “We cannot allow a candidate with such a historical perceptive to handle Korea’s future.”

“She said my father illicitly accumulated a fortune,” said Kim Yeong-cheol, fifth son of Kim Ji-tae. “But that is a groundless argument and we cannot stand it. We will consult with a lawyer and take legal action for defamation.”

Calling Park’s press conference “a stopgap measure to dodge a problem for the time being,” Kim said the public won’t believe Park’s argument that she has nothing to do with the Jeongsu Scholarship Foundation. “She inherited it from former President Park Chung Hee.”