New law leads to fewer babies up for adoption

New law leads to fewer babies up for adoption 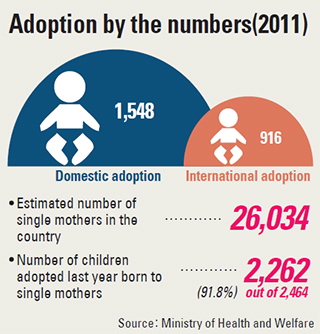 In an effort to shed the infamous nickname “the source of overseas adoption,” the government put the Special Adoption Law into effect in August this year, aiming to make the adoption process more transparent and better protect the rights of soon-to-be adopted babies with enforced state control.

Under the newly enforced regulations, those who wish to adopt a child must receive approval from family court, both for domestic and international adoptions.

Since the law went into effect, there have been only two cases of the family court granting domestic adoption approval and no international adoptions, marking a drastic decrease.

The Daegu Family District Court late last month allowed a couple to adopt a female baby born in June. Since August, there have been nine adoption requests submitted to courts nationwide, of which seven requests are undergoing review for adoption eligibility by courts.

Before the law, families could put their children up for adoption by simply taking the baby to a government-sponsored adoption agency without registering.

“The number of babies arriving at the agency for adoption has decreased by almost one-third since August,” said Choi An-yeo, a manager of the domestic adoption team at Holt Children’s Services, a 57-year-old organization devoted to domestic and international adoption.

“The special law is intended to induce more unwed mothers to raise their children rather than resorting to adoption by mandating them to keep their infants for a week and to register their babies.”

The law requires single mothers wishing to put their babies up for adoption to keep newborns for one week before they begin the process, a change from the previous practice in which mothers could put their children up for adoption right after giving birth.

These mothers are searching for other options now that another step in the process has been added.

The “baby box” service, an incubator-shaped box where unwed mothers can leave their babies, run by a pastor in Gwanak District, southern Seoul, has seen a sharp increase in the number of newborns in recent months in contrast to a drop in a number of babies arriving at adoption agencies in the past two months.

First installed in 2009, 98 infants have been left in the box as of the end of September. Of the 98, 24 babies arrived in the box between August and September this year.

Another clause of the law causing controversy is one that mandates unmarried mothers report newborns for family registration.

Some experts say the requirement could come across as huge burden to single mothers worried that birth records could have unintended consequences given the country’s prejudice toward births out of wedlock.

“Family registration will be used for family courts to judge whether to grant adoption approval,” said Yun Su-hyun, deputy director at the division of child welfare at the Ministry of Health and Welfare.

“Once the adoption process is complete after the court makes its decision, registration records of birth parents will be closed to the public.”

“Requiring birth parents to register babies guarantees one of the most fundamental rights of children,” said another official at the Welfare Ministry, who declined to be identified.

“We could not maintain the practice [which allows adoptions without a mandate for registration] that does not match the country’s level of development.”

Under the new regulations, adopted children have the right to request information about their parents when they reach age 19.

The information, such as birth parents’ names, address and contact numbers will be provided should the parents agree to give out the information at the time of request. Parents have the option to decline the request.

Only the adopted children will have access to the parental records.

Since the implementation of the Special Adoption Law, calls have also been rising that the state needs to provide more support measures for single mothers.

After paying 380,000 won for monthly rent and expenses for baby care, Jung said she’s left with around 400,000 won. “I get no government aid for child care,” she said.