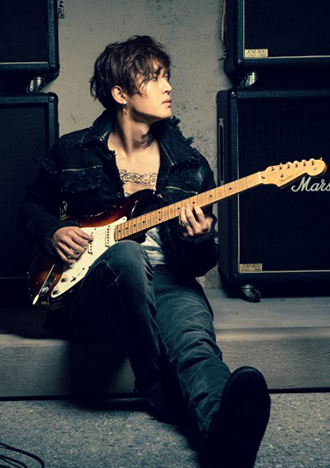 Ahead of his Japanese album’s release in December, Kim Hyun-joong has released some images from his album jacket, setting hearts fluttering.

In the photos taken for “Unlimited,” Kim assumed a serious rocker pose, playing electric guitar while dressed in leather and looking as aloof as ever.

“Unlimited” is his first official Japanese album, and unlike his previous single “Heat,” its 14 tracks are said to have a heavy rock feel.

The title track, “Your Story,” was arranged by and features Kim Sun-il from the rock band Daybreak.

Although Kim is venturing into new territory, his last effort in Japan was a huge hit. In July, Kim set a record for the most albums sold on the first day of release by a foreign artist in Japan, with more than 138,000 sold.

“Heat” dominated Oricon’s daily and weekly charts and sold more than 200,000 copies in just two months. Ahead of the album release, “Heat” garnered much attention as Japanese musician B’z contributed to the writing process.
By Carla Sunwoo