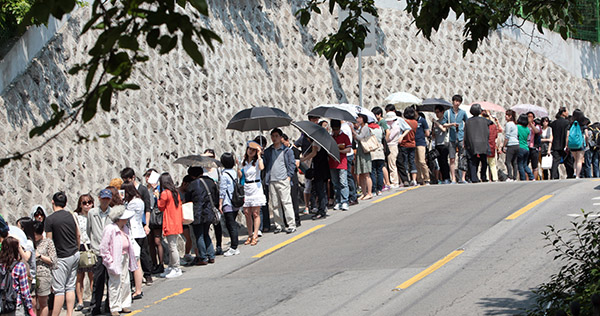 People line up to visit the Kansong Art Museum in May. The country’s first private museum, the Kansong has what many experts say is Korea’s most important collection of art and cultural artifacts. [JoongAng Ilbo]


“You are selling a calendar? Wow, that’s new,” said an old man in a suit and hat. “And you accept credit cards, too? My my.” He couldn’t hide his surprise.

The man was at the museum shop in Kansong Art Museum, Korea’s first private museum built in 1938 by legendary art collector Jeon Hyeong-pil (1906-1962). Currently, an exhibition is under way dedicated to Chinese paintings from the Ming and Qing dynasties, acquired by Jeon because of their significant influence on the art of Korea.

Today, Kansong Art Museum is best-known to academics and policy makers for two things: its priceless collection of monumental Korean art and cultural objects and its notoriously closed and old-fashioned way of doing business. For example, the Kansong holds just two fortnight-long exhibitions a year in the spring and fall.

The museum shop mentioned above is a tent. And while it is selling calendars now, prior to the last exhibition in May, it had offered only small reproductions of paintings displayed in a clear file notebook. And there was only one notebook. But at least when it was their turn to look through the book and make selections, customers could - for the first time - pay by credit card.

Yes, times are changing at Kansong, but many say more needs to be done and that four weeks a year is just not enough to take in all that the museum has to offer.

In the past, Kansong was frequented mostly by students or scholars of Korean art. But over the past several years, more and more people have learned about this place. As the facility and its respected researchers age, the number of daily visitors has increased to tens of thousands with lines to get into the small exhibition space getting longer every year.

As Korea celebrates the 50th anniversary of the death of Jeon Hyeong-pil, the dilemma for Kansong deepens.

Kansong is thought to have about 5,000 items, including 12 national treasures and eight treasures. They are owned by the descendents of Jeon, while management rights belong to researchers at Kansong. Korean studies experts liken the Jeon family to the Medicis of Italy, who eventually donated their magnificent collection to the citizens of Florence. 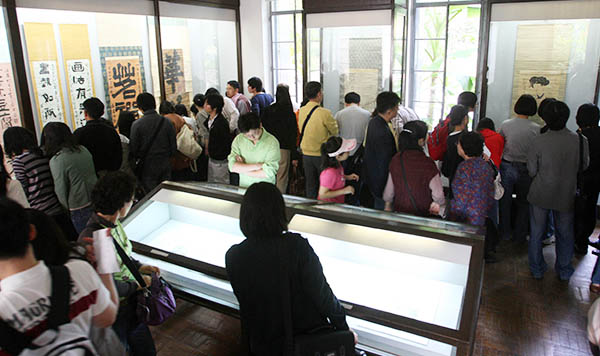 In fall of 2008, Kansong Art Museum held an exhibition on Shin Yun-bok. Since then, the number of visitors to the art museum has surged significantly. [JoongAng Ilbo]

Among experts, it’s a well-known fact that Kansong has in possession most of the country’s best art and artifacts. “Even among the works of a particular artist, the best one is usually at Kansong,” says Jeong Kye-ok, former director of the division of artistic heritage at the National Research Institute of Cultural Heritage.

But what is not entirely clear is exactly what items are at Kansong and what condition they are in.

At an Oct. 5 parliamentary hearing of the Cultural Heritage Administration (CHA), Democratic United Party lawmaker Shin Kyeong-min claimed that the cultural properties at Kansong Art Museum are at risk, and some possibly damaged, due to old and outdated facilities. He criticized the CHA for failing to take measures to ensure the safety of Kansong’s inventory.

Shin introduced testimony of a journalist and painter who had said they saw stains and tears on a book by Jeong Yak-yong (1762-1836), one of the most important scholars of Joseon period (1392-1910), as well as insects inside a case displaying a painting by Jeong Seon (1676-1759), a renowned landscape painter.

Shin described Kansong as “a place with extraterritoriality rights,” adding that no one knows what’s in storage, so it would be impossible to even know if an important piece were being taken out of the country.

Kim Chan, the head of CHA, admitted, “I have never been to the storage facility of Kansong. I will try to talk to Kansong and conduct an inspection.”

But does the public or the government have the right to know what’s at Kansong and if it is being well preserved?

Kansong is, after all, a private collection, note museum officials. It is not a state-run or state-registered museum and therefore not obliged to operate in accordance with the government’s museum-related laws.

“Simply put, think of it this way: We have a collection of relics in our house. And we’d like to share them with others,” says Baik In-san, a curator at the museum. “So we open the doors of our house. It’s a shabby, humble house. So please understand that. And we hope you enjoy the relics.”

Baik, who’s been working at the museum for 20 years, points out that the Kansong has held more than 80 exhibitions since 1971, all free of charge. And he says many of the pieces in the museum’s collection would have been smuggled out of the country and lost if Jeon had not acquired them.

Highly respected art collector Jeon Hyeong-pil (1906-1962) established the Kansong Art Museum. Bohwagak, the exhibition hall of the museum (above) was designed in 1938 by a Korean architect and holds an important place in Korea’s art and architectural history. But some express concern that the facility is too old to safeguard the national treasures behind its doors. [JoongAng Ilbo]

It’s true in some cases that national treasures are privately owned and, thus, more like “family treasures.” Such is the case with Kansong, but that had not struck a nerve with anyone or been a controversial issue until several years ago.

In spring of 2004, the museum held a large-scale exhibition of works by Jeong Seon that received wide coverage by media outlets.

Things got worse - or better, one could argue - in fall of 2008. The museum held an exhibition on Shin Yun-bok (1758~?), one of the most important artists of the late Joseon era.

That same year, 2008, the popular drama “Painter of the Wind” and film “Portrait of a Beauty” were released. Both of them revolve around the life of Shin. In the drama, Shin is actually a woman disguised as a man in order to become a court painter. In the film, it’s Shin’s little sister who disguises herself as Shin after he dies suddenly.

“Portrait of a Beauty” is one of the best-known paintings by Shin, and it was on display at Kansong’s fall 2008 exhibition, drawing record crowds.

More than 100,000 people flocked to see the paintings, a record number for the museum. People waited for two to three hours to get in, forming a long line in the quiet Seongbuk-dong neighborhood in central Seoul.

That was when media reports surfaced criticizing outdated facilities and services, and calling into question the Kansong’s stewardship of such an important collection. Bohwagak, which is the name of the exhibition hall of Kansong, was built in 1938.

“The thing is we have held our exhibitions this way for more than 40 years and it has never really been a problem until now,” Baik says. “All these years, our exhibitions were the venues to showcase our researchers’ recent studies and not necessarily aimed at drawing public attention.”

Media reports also pointed to how the so-called Kansong loyalists are closed and monopolistic, enjoying the art and antiques only among themselves and only for their studies. Perhaps the most prominent Kansong loyalist is museum research director Choi Wan-su.

“Kansong is hard to approach and assess not only for average people, but also scholars,” says a Korean art professor, who wishes to remain anonymous. “It is very uncooperative when scholars request a personal inspection or to publish a picture of one of its pieces on dissertations. It requests huge amounts of money.”

Officials at the museum readily admit the Kansong’s collection is not accessible to most scholars, but they say that is because the museum is neither government-run nor corporate-funded and lacks the money and personnel to accommodate all requests. Even at the National Museum of Korea, sources say, personal inspections by a researcher are limited to 15 a year, and one inspection requires three employees to supervise.

Yet even Kansong acknowledges that things cannot continue as they are and a solution is needed.

Aside from the close-minded philosophy of Choi and his allies, most of the museum’s issues, such as outdated facilities and limited access by the public and scholars, are due to the lack of funding. Insiders say financial support is critical for the future of the museum and its collection.

The Kansong has not been without offers, but they came with strings attached that the museum would not accept, such as donating its collection to the state, which officials at the museum believe would go against the will of Jeon Hyeong-pil. Many academics also oppose such a move, sources say.

“There have been talks in various circles that support must be provided for Kansong, but none materialized,” says Jeon Seong-woo, the eldest son. “We will run Kansong on our own as long as we can.”

Jeon Yeong-woo, the third son, also expresses reluctance to relinquish some of the museum’s autonomy. “Based on my experience, all support comes with conditions. None of us considered Kansong’s collection as our private asset and we don’t think of it as family treasures to pass on to our children,” he says.

After the hearing earlier this month, the Cultural Heritage Administration said its officials visited Kansong and met with Choi, asking what kind of help Kansong needs. But similar discussions were held at least eight years ago when Yoo Hong-joon, the famous art historian, was the head of CHA.

Moon Yeong-cheol, the manager of CHA’s tangible cultural property division, says Kansong is responsible for articulating the kind of help it wants. But Baik of Kansong says that as a private museum, it is difficult to actively seek help from the government.

“I can understand why it would be hard for Kansong,” says Kim So-yeon, a professor of museum studies at Kaywon School of Art and Design. “Then other private museums would want help and when denied they will question the fairness. Many private museums suffer from financial difficulty. But in my opinion, Kansong is not just any private museum. Most people would agree with me when I say it’s okay to make an exception for Kansong.”

Kim Jong-hun, an architecture professor at Pai Chai University who advises CHA, suggests that a “culture tax” should be levied on those who benefit from the existence and operation of Kansong. Proceeds would be used for maintenance.

“The best solution is that the owners continue to operate the facility themselves and the society help establish the grounds for them to be able to do that,” Kim says. “Those that benefit from the cultural properties, like the academics or publishers, should share the costs. If it materialized, that would be the first case in Korea.”

Just like when Kansong opened as the country’s first private museum, whatever solution allows it to continue to operate and maintain its invaluable collection will also set a precedent. That is why small changes, like selling calendars or accepting credit cards, are something to keep an eye on.

Baik was asked what kind of museum Jeon Hyeong-pil would have liked to see: “I don’t know,” he says. “I wouldn’t know. Times are different now.”