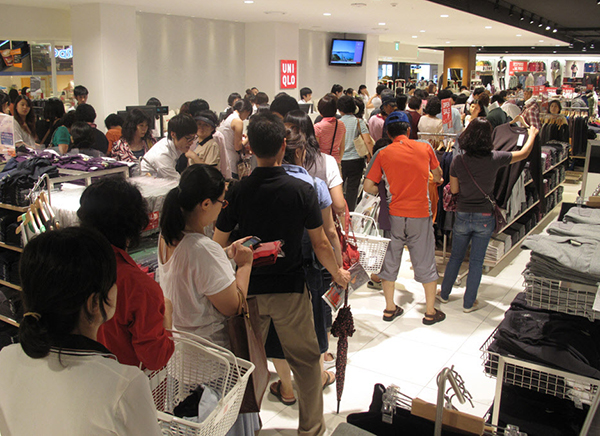 Kim Hyo-yeon, a 29-year-old office worker at a financial company in Seoul, has a designer purse and bag but prefers shopping for cheaper clothing brands like Zara and H&M.

Despite her ample salary and status as part of a dual-income family, she also cooks at home every day rather than heading to restaurants since she took out a bank loan to get married last year.

“I used to enjoy shopping and eating out frequently, but I started looking for low-priced brands and stopped dining out to save money,” Kim said.

This highlights a growing trend among Korean consumers, who are tightening their purse strings and reshaping their spending patterns to beat the deepening financial pinch.

Even high-income earners are shifting away from high-end luxury goods to cheaper SPA clothing brands such as Uniqlo and H&M, according to industry survey by the Korea Chamber of Commerce and Industry (KCCI). SPA is an abbreviation of specialty store retailer of private label apparel.

Meanwhile, sales of hanwoo rib-eye steak, the most expensive Korean beef, are going through the roof as more families save money by cooking themselves rather than heading to Korean barbecue restaurants.

An index developed by top retailer E-Mart to gauge the sentiment of general shoppers shows how heavily the recession is weighing on them. It has given a reading below 100 - indicating that sentiment has worsened - for the last five quarters. It tallied 96.1 in the July-September period, its lowest reading for the third quarter ever.

The index analyzes changing consumption patterns of E-Mart’s 476 product lines, and showed that apparel took the biggest hit (92.4) in the latest quarter. The index for furniture, home appliances and other household goods was tallied at 94.6, influenced by rising deposits to rent houses among other factors. The indices for food and culture stood at 97.5 and 95.2, respectively.

Rich get the SPA treatment

Households earning 7 million won ($6,340) or more a month are leading sales of fast fashion brands such as Uniqlo, Zara and H&M, according to a survey on 500 consumers in metropolitan areas by the KCCI.

It found that 51 percent of households in the aforementioned salary bracket prefer to wear such brands, compared to 44 percent that pull in between 3 million and 7 million won a month and 31.6 percent of lower-income earners.

“As the recession continues, consumers are increasingly turning to cheaper clothing even among high-income households, except for certain high-end products,” said Jung Soo-kyung, director of the KCCI’s retail industry policy office. “But many in lower-income brackets complain that the prices of fast fashion brands are too burdensome.”

Although the survey showed that 85 percent of respondents opted for SPA clothing because of its affordability, 49.5 percent cited the variety of product lines, 41.9 percent named design, 41.4 percent quality and 32.4 percent the shopping atmosphere. Respondents were allowed to choose multiple answers.

Large discount chain stores are reporting that rib eye, the most expensive cut of Korean beef, now accounts for the largest share of sales of prime hanwoo, as consumers opt to barbecue at home instead of forking out at restaurants.

E-Mart, the country’s largest discount chain, also reported a boost in sales, according to a segmental analysis of hanwoo between January and September. The report showed rib eye accounted for 35.8 percent of all hanwoo sales, up 15.4 percentage points from last year.

Brisket and flank, widely used as soup ingredients, gobbled up 14.7 percent of sales, while bottom round was the third most popular beef cut with 11.9 percent. It is used to make marinated beef and bulgogi.

“From the time E-Mart opened in 1993 until last year, rib-eye sales have only risen higher during a two-month period from July to August 2011,” said Hong Sung-jin, a livestock buyer at E-Mart. “But this year, rib eye was the top-seller every month from January to September, displacing brisket and flank.”

Retailers offer rib eye for around 6,000 won per 100 grams (3.5 ounces), whereas at restaurants in Seoul a single serving of 150 grams costs between 30,000 and 40,000 won. It has dropped in price at local stores since the head of cattle reared nationwide jumped this summer, industry figures say.