Nexen sees plant as springboard to the global top 10

Nexen sees plant as springboard to the global top 10 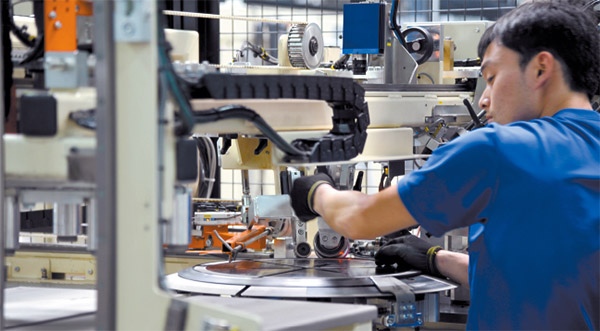 An employee at Nexen Tire measures the circumference of a tire at the company’s plant in Changnyeong County, South Gyeongsang. The tire maker said it will invest 1.2 trillion won (1.08 billion dollar) by 2018, when it expects to be manufacturing 21 million tires a year at its third plant. Provided by the company


Nexen Tire aims to become a top 10 global player in 2018 by taking full advantage of its new plant in Changnyeong County, South Gyeongsang.

The nation’s third-largest tire maker behind Hankook and Kumho is currently ranked 24th worldwide by sales, but it believes expanding the plant about an hour outside Busan on the southern coast will catapult its standing forward within six years.

The factory, built on a 610,000-square-meter (6,565,990-square-feet) plot of ground, has been producing tires since March after it took over a year and a half to complete. But Nexen decided to delay holding an official completion ceremony until Oct. 11 after the company stabilized operations there. 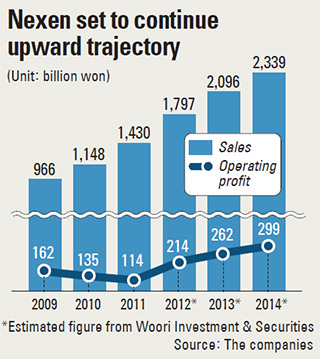 The event also marked the symbolic start of its journey to break inside the ranks of the industry’s top 10 manufacturers, it said.

“Completing the factory is the most significant step in our company’s 70-year-old history,” said Kang Byung-jung, the company’s chairman. “With this plant, we will reap bigger rewards than in the past.”

The 73-year-old added that the factory will keep growing. Currently, It can now produce up to 6 million tires a year but Nexen plans to invest an additional 1.2 trillion won ($1.08 billion) by 2018 to more than triple this number to 21 million.

Combined with the company’s main plant in Yangsan, also in South Gyeongsang, and another in Qingdao, in China’s eastern Shandong province, the company expects to double production to 60 million tires annually from 2018.

Nexen’s decision to upgrade its third plant is being seen as a positive at a time when few companies are making large-scale investments in the country as they seek cheaper costs overseas.

Around 900 employees are now working in the plant, but some 2,000 more jobs will be created after it is enlarged further, according to Nexen.

“I was really moved when Kang said it was a right decision to invest in Korea,” Minister of Knowledge Economy Hong Suk-woo, who attended the plant’s first-phase completion ceremony, said in a statement. “I hope many companies take note of this.”

Kang emphasized that his company can remain competitive by focusing on product quality management despite relatively high labor costs here compared to other emerging markets.

“?‘Made in Korea’ still holds a certain power in terms of what it implies about quality to keep us competitive globally,” he said. “Changnyeong is also well-placed to accommodate such a plant as this due to its excellent logistics infrastructure, and water and power supplies.”

The factory will largely be dedicated to churning out ultra-high performance as well as eco-friendly tires using the latest high-tech facilities. From delivery of raw materials to storage of finished goods, the entire process is fully automated, including the use of laser-guided vehicles to move the products along fixed paths. Nexen exports the finished tires to 130 countries.

This high level of automation means the factory can run around the clock on a three-shift system with just 900 employees. Nexen said officials from Chrysler, Volkswagen and Hyundai Motor have recently visited factory to see how it works.

“This eco-friendly plant will serve as a leading facility while also bolstering the local region’s reputation as a green belt,” said Lee Hyun-bong, vice chairman of the company, adding that this will boost the company’s brand.

Nexen, which changed its name from Heung-A in 2000, has been trying to make its mark as an original equipment (OE) manufacturer. OE tires refer to those supplied to carmakers’ assembly plants for installation in their new vehicles.

Hyundai and Kia are using Nexen tires in Sonatas, Santa Fes, K5s and K7s. The tire maker also concluded a deal with Mitsubishi and Fiat to supply them with OE tires early next year.

“We will continue to expand our capacity while also being sure not to neglect ramping up the power of our brand,” Lee said. “We foresee continuous success.”

Nexen claims to be one of the fastest-growing tire companies in the world. It marked 1.43 trillion won in sales last year, up 21 percent from 2010.