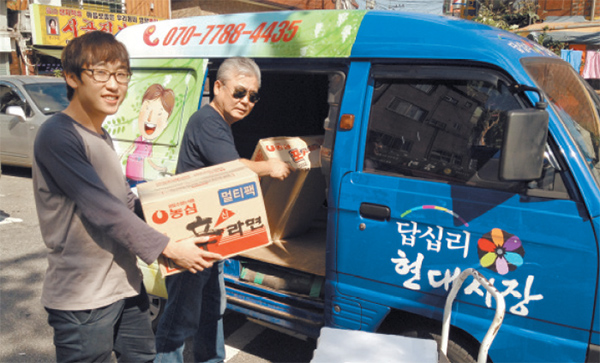 A merchant from Dapsimni Hyundai Market delivers products which students ordered for their membership training retreat.

The students have connected the Dapsimni Hyundai Market with the membership training retreat so instead of the students purchasing goods directly at large markets, the traditional market people will purchase the goods for the students upon request. The products will be delivered to the students by the requested date. The fact that traditional market sells goods at rather cheap price and is close to Cheongnyangni Station which is most frequently used as the departing point when students head off for the much awaiting retreat is a big merit of this service.

Based on the survey conducted among 150 students, there are various product packages according to the number of people for the outreach. To facilitate online order, the Chung-Ang University students donated their talent in setting up the Web site (hdmtmall.com). The order can be made via phone as well. Ordering products besides the items on the list is also the different part with marts. And through customer satisfaction survey they will continue to monitor the product quality. So far the feedback was positive; the meat was better quality than had it been purchased separately.

The students who have designed the project distributed 2,000 leaflets to 26 universities. The team head, Kim Min-seok (business administration major sophomore) said, “Just in University of Seoul there are over 80 MTs in majors and clubs per semester. If we count the number of nearby universities, the number is enormous. Until now we have received 12 orders and completed the delivery and 2,860,000 won($2,600) of profit was made. After the midterm is completed and the MT season starts, we are expecting the order to rise sharply. Currently only six shops are participating for all products.”

The Hyundai Market merchants see this as an opportunity to increase their sales as well as a chance to seek unification among the merchants. SIFE is a club founded in 1975 in the United States to support economic independence of economically neglected people by students using their financial economic knowledge. As an international economic volunteer and social contribution club, it was first launched in Korea in 2005.

Currently there are 30 universities and 2,000 students in Korea participating in SIFE. The SIFE in University of Seoul was organized in March 2010 and there are four teams with 24 students working to help the development of local society.