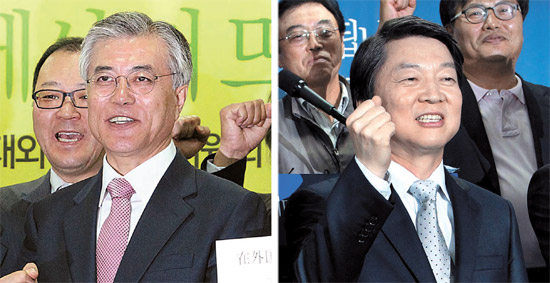 With less than two months left before the presidential election, more than a hundred prominent figures in the literary, film, art and religious communities pressured the opposition party’s Moon Jae-in and independent candidate Ahn Cheol-soo yesterday to quickly merge their campaigns and field a single candidate.

Novelists Hwang Sok-yong and Jeong Do-sang as well as painter Lim Ok-sang held a press conference yesterday and announced a joint statement supported by 102 cultural celebrities and academics to declare their support for the liberal campaign.

“Right now, the most important topic for Korea is changing the administration,” the statement said. “We support both Moon and Ahn.”

Calling consolidation of the candidacies between Moon and Ahn a precondition to start political reform, they said the process will be the only way to open the door for a new Korea.

They said they will demand a drastic reform of the Democratic United Party if Moon will try to keep the obsolete system by hiding behind his election committee.

They also pressured Ahn to “present a specific blueprint and methods of political reform rather than making abstract, theoretical remarks.”

“We are not endorsing a particular candidate at this point because we strongly hope to see a change in the administration,” they said.

“The two candidates must never repeat the failure of 1987, which caused serious regression in the democracy and social development of Korea.”

Ahead of the 1987 presidential election, the opposition contenders Kim Dae-jung and Kim Young-sam failed to consolidate their candidacy against the ruling party’s Roh Tae-woo and Roh won the race.

As outside pressure grew on the two contenders to merge their campaigns to heighten the liberals’ chance against the conservative Saenuri Party’s Park Geun-hye, the Ahn campaign took a step closer to the process. Until now, the independent candidate remained ambiguous, despite growing pressure from the DUP and Moon to start the negotiation.

Keum Tae-sup, a senior member of Ahn’s campaign, said in an interview with PBC radio yesterday morning that finding a way to consolidate the candidacies of Moon and Ahn won’t be a difficult challenge.

“When the consolidation process is agreed upon between us and the DUP, public opinion will also be created to support the process,” Keum said.

“I think it won’t be difficult to come up with a method [to pick which candidate will run.] As long as we and the DUP can present the vision for new politics and specific policies to demonstrate the changes that we aim for, creating a rule won’t be difficult. It is just premature to talk about the consolidation, when we could not reach that point.”

He then said it won’t be difficult to combine the two campaigns’ policies, because they share many common themes.

Representative Song Ho-chang of the Ahn campaign also talked about the possibility during his TV appearance on Sunday. He said the task will be joining forces with the DUP before the official deadline of the candidate registration on Nov. 26.

Park Sun-sook, former DUP lawmaker who currently co-chairs Ahn’s campaign, also said yesterday that she believes in the consolidation process and Ahn will follow it and win.

“Ahn is the candidate who can change the administration and change politics,” she said.

She also responded positively to the prominent liberal figures’ statement to urge the consolidation of Moon and Ahn. “We see it as an expression of desire for a change in politics by winning the election,” Park said.

In the JoongAng Ilbo’s latest survey of 1,500 voters, Moon was leading against Ahn in the liberal runoff within the margin of error. The poll, conducted over Friday and Saturday, was the ninth regular survey on the presidential election.

According to the survey, Moon scored 43.2 percent, while Ahn earned 41.3 percent in the runoff. But subtracting supporters of the Saenuri Party’s Park from the outcome, Ahn led the race with 50.9 percent, while Moon was backed by 43.5 percent. The outcome shows that Park’s supporters are influencing the liberal runoff based on who they think is more vulnerable to Park, and could be an important factor.

The support of Jeolla voters, whom have long displayed animosity against the Saenuri Party and Park, is also another key issue in the runoff.

Shortly after Ahn declared his presidential bid, the seventh survey of the JoongAng Ilbo took place, and Ahn scored 54.9 percent among the Jeolla voters, while Moon scored 38.3 percent in the runoff.