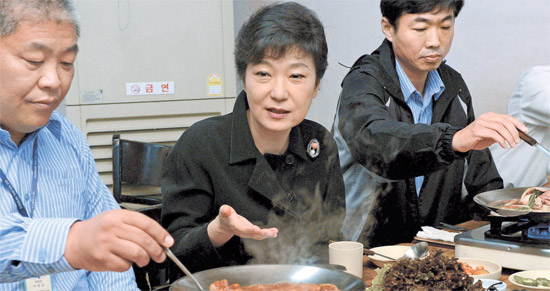 It became obvious last week that the Achilles’ heel of the presidential campaign of ruling party candidate Park Geun-hye was her connection with a scholarship foundation with a troubled past and contentious future.

Her attempt to get past the issue Sunday with a grab-the-bull-by-the-horns press conference backfired when she stumbled on a crucial point related to her father, former strongman Park Chung Hee.

Park held a press conference Sunday to distance herself from the scandal involving the Jeongsu Scholarship Foundation, created during her father’s authoritarian rule with confiscated assets. She chaired the foundation from 1995 to 2005.

While Park reiterated she has nothing to do with the foundation now and urged its board to make that clear, she made a crucial mistake by insisting that there was a court ruling that the Park Chung Hee regime did not coerce the original foundation owner, Kim Ji-tae, to surrender his assets.

Last February, the Seoul Central District Court ruled that Kim was forced to give up his assets, but the takeover could not be nullified because it was hard to say whether the coercion was strong enough to completely deprive Kim of his decision-making power.

Although Park corrected her remarks shortly after the press conference, it was already aired live nationwide.

From the start of the campaign, Park has stumbled almost every time she has tried to distance herself from her father’s autocratic legacy.

She was immediately criticized for her seemingly myopic view of the past by the opposition Democratic United Party’s presidential candidate Moon Jae-in and independent liberal candidate Ahn Cheol-soo. Kim’s children also threatened to file a defamation suit against Park for saying in the press conference that their father was a corrupt businessman.

Park faced an additional dilemma when her former secretary, Choi Phil-lip, refused to step down as chairman of the foundation. The DUP has accused Park of keeping control over the foundation through Choi.

After Park’s press conference Sunday, concerns grew from inside the Saenuri Party that she managed to make the situation worse. Lee Sang-don, a member of Park’s political reform committee, admitted yesterday on CBS radio that the press conference was a meltdown.

“The historical baggage is fundamentally unfavorable to her, so she must move beyond it,” Lee said. “I’m worried it stirred up more controversy.”

Representative Shim Jae-chul of the Saenuri Party’s Supreme Council expressed his frustration about Park’s campaign aides. In an interview with PBC radio, Shim said he could not understand why her strategists allowed Park to make such a crucial factual mistake at the press conference.

Representative Lee Jae-oh, Park’s longtime foe inside the Saenuri Party, criticized her. “It’s like she has just confessed that her previous apology for her father’s rule was insincere,” Lee told reporters yesterday. “The foundation was a product of her father’s military coup, and who will believe her apology if she insists that it had no legal problem?”

Park, however, refused to go on the defensive. At a campaign meeting yesterday morning, Park urged supporters to fight the opposition’s attacks. “From dusk till dawn, the opposition party attacks the Saenuri candidate,” Park said. “I want you to keep the steam up. Justice never loses.”

She also tried to make up for her mistake. In a meeting with reporters in the afternoon, she criticized Choi for refusing to step down and demanded the foundation deny that it was running political scams to support her.

She also said her remarks about the court ruling on her father’s regime’s coercion invited some misunderstanding. Her campaign attacked the relationship between the foundation’s original owner, Kim Ji-tae, and President Roh Moo-hyun, who was a mentor to Moon, the DUP’s presidential candidate.

Lee Jung-hyun, public affairs chief for the Park campaign, said Kim was a corrupt businessman but the DUP was trying to protect him because Roh had received a scholarship from Kim’s foundation when he was a middle school student.

“And Roh, after he became a lawyer, defended Kim’s family in a lawsuit to challenge the 10 billion won[$9.05 million] inheritance tax,” Lee said.

Moon yesterday continued to attack Park for her historical perspective.