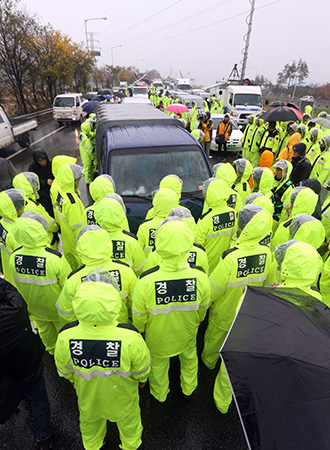 A group of North Korean defectors and civic activists scrapped a plan to send leaflets over the border after violently clashing with local policemen and prompting threats of artillery fire from North Korea.

Pyongyang threatened to attack South Korean territory if the defectors launched their 10 balloons with leaflets criticizing the dynastic succession in Pyongyang and even advised people living near the Imjin Pavilion in Paju, Gyeonggi, to evacuate.

On Sunday, the South Korean military observed Northern soldiers pointing artillery toward the South. The military raised the alert to the highest level and yesterday morning ordered about 820 local residents to evacuate to local shelters. According to the military, a North Korean frontline unit brought out artillery and dispatched some soldiers toward the border.

“They threatened us before,” an official from the military said, “but dispatching the soldiers was new.” 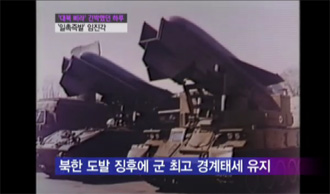 Restaurants near the border area were shut, and all local trains leading to the pavilion or neighboring cities were temporarily suspended from 8:30 a.m. Starting from 8:40 a.m. yesterday, Paju policemen barricaded the two gates to the Imjin Pavilion, which is near a monument to families separated by the Korean War, and blocked all visitors.

About 80 activists had prepared to fly 10 balloons at around 11 a.m. yesterday.

When they arrived about six kilometers (3.73 miles) short of the pavilion, policemen surrounded their cars, a chartered bus, and a 1.2-ton truck carrying 200,000 leaflets and a gas tank to inflate the balloons. The activists on the bus tried to get off, but policemen blocked them. Park Sang-hak, president of the Fighters for Free North Korea, climbed on the roof of his car and angrily protested the police barricade.

“On Sept. 27, we visited the Paju police precinct and reported our plan to stage a rally at the Imjin Pavilion, and the police authorized it,” Park shouted. “We came here to tell the truth of North Korea’s third-generation dynastic succession to the North Korean people.”

North Korean defector Kim Sung-min, founder of Free North Korea Radio, said, “It’s too much to block us from even getting off the bus.”

“We just blocked their campaign to prevent any possible damage,” a police officer told reporters.

The activists clashed with police for about three hours and then withdrew around 1 p.m. Park and Kim told reporters that they will return to send the leaflets over the border. Some members of the Solidarity for Peace and Unification of Korea, a Christian group that opposes the leaflet campaign, held a banner reading, “Stop sending leaflets to the North!”

“If those leaflets provoking a rebellion are spread, there’s a high possibility of a military clash between the two Koreas,” Lee Jeok, a pastor who leads the group, told reporters. “We strongly demand they stop the dangerous campaign right now.”

North Korea warned over the weekend it would retaliate with gunfire if the leaflets were launched. The state-run Korean Central News Agency said Saturday that if any leaflets made it over the border, the “Western Front will stage a merciless military strike without warning.”

The minister of national defense, Kim Kwan-jin, has said any attacks would be met with immediate retaliatory fire. The Ministry of Unification said there’s actually no legal way to block a civic group from sending such leaflets.

“This campaign is not the first,” Kim Hyung-suk, the spokesman of the ministry, said at a briefing. “The ministry has dissuaded civic groups from carrying out such campaigns, considering the [frosty] inter-Korean relations.

“In the government, there have been discussions on how to restrict those campaigns, but at this moment, there’s no evident ground under the current law,” Kim said.

“Pyongyang has threatened a military strike against any leaflet campaign,” a Unification Ministry official told the Korea JoongAng Daily, “but it was the first time that Pyongyang mentioned a specific target, the Imjin Pavilion.”