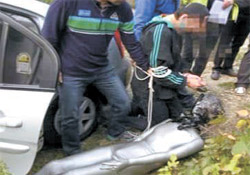 A woman who ran a thriving rent-a-car business asked her husband for a divorce and offered to pay him alimony of 600 million won ($542,864).

The husband thought it made better business sense to pay a hit man 130 million won to kill her and take over her business.

The Seongdong Police Precinct in northern Seoul said yesterday they arrested a 40-year-old man surnamed Jeong for hiring a hit man to kill his 34-year-old wife surnamed Park. The hit man, surnamed Won, 30, was an owner of an errand center, they said.

The police said Jeong and Park got married in 2004 and Jeong was running the rent-a-car service, but it was failing so he gave it to his wife in 2008. Jeong turned his attention to running three bars in Nonhyeon-dong, southern Seoul.

But Park turned the business around and she started making an average net income of 200 million won a month.

The couple drifted apart, police said, and Park asked Jeong for a divorce. She promised 600 million won in alimony but said she wanted custody of their child.

For Jeong, 600 million won wasn’t enough to put him clear of debt and give him a solid financial standing, according to police; retaking control of the rent-a-car business would.

Jeong was put in touch with Won, the errand center owner, and the two met in one of Jeong’s bars in Nonhyeon-dong on May 21, police said. Jeong asked Won to kill his wife and paid 30 million won as a retainer, which was followed by 160 million won more in nine later installments.

At 4 p.m. on Sept. 14, police said, Jeong called his wife and told her to meet Won, whom he described as the owner of a car repair shop. When the wife got into Won’s car to discuss business, Won drove into an underground parking lot of a building in Seongdong District, western Seoul. He strangled her to death, police said.

Won buried Park’s body on a mountain in Yangju, Gyeonggi, at 8:30 p.m. on the same day, police said.

After the murder, Jeong and Won teamed up to try to obscure any traces of her disappearance.

Jeong reported to his local police that his wife hadn’t come home. But Won had the wife’s cell phone, and he turned it on and off in multiple locations to make it look like she was alive and moving around. He sent text messages to Park’s mother, friends and police officers investigating her disappearance in order to make it seem she was still alive. “I’m fine, don’t worry. I’ll be back home soon,” one message read.

The pair also used Park’s debit card in a nail shop, dress shops and coffee shops in Suwon, Gyeonggi, and Gangnam, southern Seoul, where CCTV cameras were not installed.

“Everything seemed normal when we checked her financial transactions,” a spokesman for the Seongdong police precinct said. “But we were finally able to find out that it was a man who used Park’s debit card when we visited shops in Suwon.” Some shopkeepers remembered a man using the debit card, police said.

The fact that the hit man was the owner of an errand center puts another spin on the story.

So-called “errand centers” are registered under the service industry law as places that run errands, such as paying utility bills for busy customers. However, errand centers have long had the reputation of doing illicit jobs for pay, such as private investigation work, which is illegal in Korea. Some are related to gangs. They can be easily opened with just a lease and an ID. There are about 3,000 errand centers nationwide.

In 2005, two employees of an errand center were sentenced to life imprisonment by a court for kidnapping a 70-day-old baby and killing its mother.