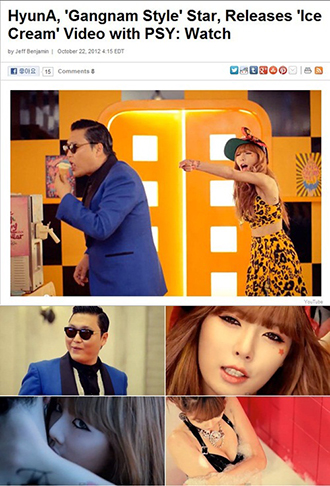 U.S. heavyweight music magazine gave props to Hyun-a’s new music video “Ice Cream” following its release.
On its Web site on Oct. 22, Billboard recommended the video to readers and described it as “unique twist” on Hyun-a's singing and rap delivery.

The 4Minute vocalist was also introduced as Psy’s counterpart in “Gangnam Style” and said the 20-year-old’s taking “front and center” with a cameo appearance by Psy.
The reviewer said the video was a bit racy by K-pop standards, full of innuendos.

The fact that the teaser video raked in more than three million views in just four days was also accredited to Hyun-a’s fame.
By Carla Sunwoo [carlasunwoo@joongang.co.kr]