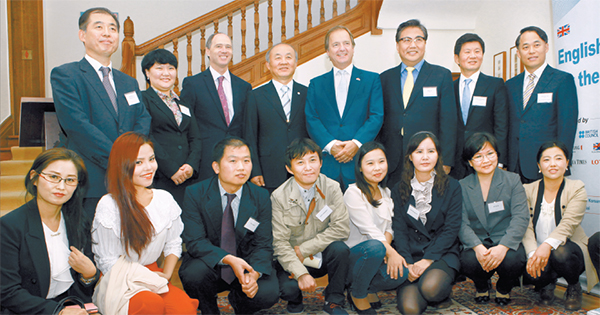 Hugo Swire, minister of state at the British Foreign Office, fourth from right, and Yu Woo-ik, South Korea’s unification minister, standing immediately to his left, pose with North Korean defectors at a ceremony in Seoul to re-launch the “English for the Future” project. By Park Sang-moon


The British Embassy in Seoul will again offer a free English education and internship program for North Korean defectors and provide a Chevening Scholarship to one of the beneficiaries.

Called “English for the Future” and directed at defectors residing in the South, the program offers three-month internships at local companies, 12 months of free English classes at the British Council and an opportunity to apply for a year-long scholarship to study at a British university.

Some 74 North Korean defectors benefitted from the program last year when it was launched, with one receiving the scholarship, but the embassy plans to boost the number to 100 new enrollees this year.

“I now have a master’s degree in globalization and development studies from the University of Sheffield,” said Oh Se-hyek, a 34-year-old defector who works at the Citizens’ Alliance for North Korean Human Rights in Seoul.

“It was a good experience and I was able to meet a wide range of people.”

Jang Eun-mi, a 30-year-old who has taken the free language lessons for two years, said she had to learn English to survive.

“If you ask any defector what is the hardest thing about settling in to South Korea, I’m sure most would say learning English,” she said. “In North Korea, the government discouraged us from learning it.”

Jang recalled her first lecture on business management at a South Korean university.

“When I went to the first class, I couldn’t understand what the professor said,” she said. “There were so many English words that I’d never heard before.”

“I’ve been studying here for two years, so now I can totally understand what the professor says during the lessons,” she said. “I also never hesitate to speak with foreigners whenever I get the chance because English is considered essential for studying and getting a job here.”

Hugo Swire, the minister of state at the British Foreign Office, delivered a speech at an opening ceremony for this year’s program held at the British ambassador’s residence in central Seoul on Oct. 16.

“The English for the Future [program] opens the door of opportunity for some of the most deserving members of South Korean society, equipping new settlers with skills that can help them to realize their potential and integrate into this dynamic society,” he said.

“Over the years, the British Embassy has shown great interest in helping North Korean refugees,” Yu said. “I sincerely hope that everyone who benefits from the program will regain their confidence and achieve their dreams to make a difference in the world.”

The opening ceremony was underscored by a performance from the four former and current beneficiaries, who gave a rendition of the Beatles’ song “Hey Jude.”