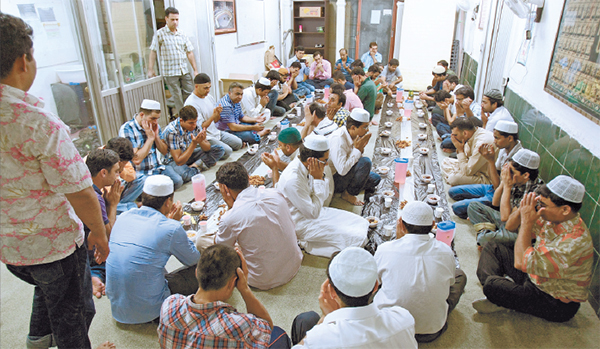 Muslims offer prayers in a mosque in northern Daegu. The mosque, founded in 2009 by a naturalized Pakistani-Korean businessman, is run on donations. By Gong Jeong-sik


DAEGU - Mohan, a 31-year-old worker from Sri Lanka, was enjoying chicken curry while watching a sports match broadcast by a Pakistani TV station in a Pakistani restaurant in northern Daegu. Mohan, who came to Korea six years ago to work at a textile factory, now runs his own business exporting used electronics gadgets to his country.

“I often come to the northern bus terminal here in Daegu and meet friends as there are many restaurants catering to people from outside Korea,” said the businessman.

Take one step into an avenue near the northern Daegu Bus Terminal in Seo District, Daegu, and you’ll start smelling spices that signal a population of people from other parts of Asia such as South Asia and the Middle East.

Of 50 shops on the street, about three dozen cater to foreigners. Indians with mustaches and hair-netted beards or Muslims with skull caps are commonly seen.

The street has been nicknamed the Avenue of Greetings among foreigners in the city. The northern bus terminal is the setting off or arrival point for people traveling between Daegu and Gumi, Gimcheon and Andong in North Gyeongsang. It’s also very close to the Daegu Dyeing Industrial Complex, which employs many foreigners, including Pakistanis, Chinese and Sri Lankans.

About 900 non-Korean workers reside in Bisan-dong, the neighborhood that includes the bus terminal and the Avenue of Greetings.

Foreign workers who live elsewhere in North Gyeongsang frequent the areas to meet friends. Immigrant women married to Koreans also come to northern Daegu to buy international phone cards and foreign food ingredients to bring back home to cook their traditional foods. On weekends, over 1,000 foreigners crowd the area.

“As more and more foreigners flock here, the number of stores catering to them has increased,” said Wu Jin-gwon, who runs a grocery store on the alley. “I decided to come here today because I heard about this place becoming a hangout for overseas workers,” said Ali, a worker who hails from Pakistan. “I feel really good being able to meet so many people from my country.”

“Areas near the northern bus terminal have emerged as the global village of the province in recent years,” said Kim Jin-hong, director at a support center for multi-ethnic families living in the Seo District.

To spiff up the area for its foreign aficionados, Seo District Office will spend 500 million won ($453,000) by the end of this year to add more benches and make other improvements.