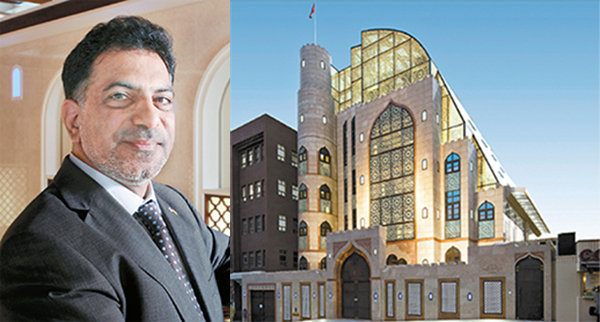 While taking a stroll along the streets of Sinmunno in Jongno District, central Seoul, near Gyeonghui Palace, there is one building hard to miss for its unique grand architecture and design: the Oman Embassy. Early this month, dozens of Koreans were invited to the embassy as part of the Seoul metropolitan government’s “open house” program to experience Arab culture.

“The visitors were impressed and happy,” said Oman Ambassador Mohamed Salim Alharthy. “It gave them the opportunity to explore not only the building design and decoration, but Oman’s culture, history and modern life.”

It was the first time the embassy has offered a public tour, although some Korean students had previously visited before leaving for Oman as part of an exchange program.

The embassy exterior resembles an Arab castle or palace, a design seldom seen in Korea. Inside the five-story building are colorful chandeliers and displays of traditional Omani products, arts and crafts, such as frankincense, coffee and dates.

The embassy, which was built last year on a 793-square-meter (8,575-square-foot) site, was designed by David-Pierre Jalicon, founder and chief executive of the architecture firm DPJ & Partners. Most of the marble used was imported from Oman.

On the day of the open house, Jalicon said that he wanted the embassy to be in the tradition of Oman and in harmony with modern Korea. The embassy was previously located in the Yongsan area before relocating early this year to Sinmunno.

“Oman architecture resembles the castles and forts that are famous in Oman,” said Alharthy. “Its uniqueness comes from design and decorations externally and internally that include arches, carvings, patterns and traditional hanging lamps and chandeliers.” Alharthy has been ambassador since March 2010.

He said opening the embassy to the public was significant because of the growing importance of people-to-people diplomacy.

“Culture is a bridge between people for better understanding,” he said. “Therefore, we are keen to participate in any cultural programs here in Seoul, such as the Hi Seoul festival and the Korea-Arab Society festival.”

Though diplomatic ties between Korea and Oman date to March 1974, few Koreans know much about the small country on the southeast corner of the Arabian Peninsula known as the “gateway to the Persian Gulf region.”

“Trade volume and cooperation has witnessed tremendous growth recently,” said Alharthy. “This shows the strong ties and relationship between the two countries; the wide experience of Korea in many fields; the business opportunities, stability and safe investment climate in Oman; and the keenness of both counties for development.”

Some of the companies participating in projects in Oman are GS, Daewoo, Hyundai and Hanjin, according to Alharthy, who called for more cooperation in the future.