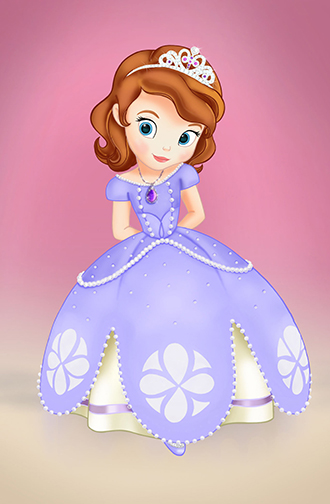 LOS ANGELES - The Walt Disney Co. is defending its newest princess following a backlash over her Hispanic-influenced ethnicity. A new character named Sofia will star in the TV movie “Sofia the First: Once Upon a Princess’’ airing Nov. 18 on the Disney Channel and Disney Junior. Hispanic advocacy groups have questioned whether the fair-skinned, blue-eyed young princess is an accurate representation of the Hispanic population and wondered why Disney isn’t doing more to promote its first princess with Hispanic-inspired roots.

“They seem to be backpedaling,’’ said Lisa Navarrete, spokeswoman for the National Council of La Raza. “They’ve done such a good job in the past when they’ve introduced Native American, African-American and Asian princesses. They made a big deal out of it, and there was a lot of fanfare, but now they’re sort of scrambling. It’s unusual because Disney has been very good about Latino diversity.’’

Craig Gerber, co-executive producer of “Sofia the First,’’ clarified in a Facebook post on Friday that Sofia is “a mixed-heritage princess in a fairytale world.’’ He said her mother and birth father respectively hail from kingdoms inspired by Spain and Scandinavia, though Sofia was born and raised in Enchancia, a “make-believe ‘melting pot’ kingdom’’ patterned after the British Isles.

The film and a subsequent TV series will follow the young princess as she adjusts to royal life after her mother marries the king of Enchancia.

“Sofia considers herself a normal Enchancian girl like any other,’’ said Gerber. “Her mixed heritage and blended family are a reflection of what many children today experience.’’

Inez Gonzalez, executive vice president of the National Hispanic Media Coalition, said Monday that the organization wanted to meet with Disney to discuss “Sofia the First.’’

“Sofia’s world reflects the ethnically diverse world we live in, but it is not our world,’’ said Nancy Kanter, senior vice president of original programming for Disney Junior.

“It is a fairytale and storybook world that we hope will help spur a child’s imagination. It’s one where we can have flying horses, schools led by fairies, songs that have a Latin beat and towns with markets like those found in North Africa.’’