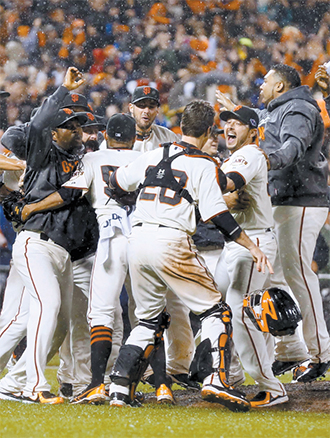 The National League champion San Francisco Giants celebrate after beating the St. Louis Cardinals behind 16-game winner Matt Cain on Monday in San Francisco. The Giants will face the Detroit Tigers in the World Series. [REUTERS/YONHAP]

SAN FRANCISCO - Marco Scutaro looked up through the rain, caught Matt Holliday’s popup for the final out and punched his ticket to the World Series for the first time at age 36.

In an NL Championship Series that saw Scutaro strain his hip on a hard, late slide by Holliday, what a fitting ending.

Scutaro tied the NLCS record with 14 hits to earn MVP honors, capping his remarkable run with three singles and a walk in San Francisco’s 9-0 victory over the St. Louis Cardinals on Monday night in Game 7.

“I was just like praying, ‘Please, you got to catch this ball,’?” Scutaro said. “It was kind of tough. I was kind of concerned. The flight of the ball, the rain kind of stopped it a little bit. Another minute, I don’t think I would have a chance.”

Starting Wednesday night in San Francisco, he’ll have a chance to break that mark when the Giants host the Detroit Tigers in Game 1 of the World Series.

The Giants acquired the Venezuelan native at the July trade deadline, taking on just $2.1 million of Scutaro’s salary from Colorado in exchange for minor leaguer Charlie Culberson.

Scutaro had a major impact even before October, batting .339 after the All-Star break.

Scutaro was hurt on Holliday’s slide in the first inning of Game 2. Scutaro got even a few innings later with his own big blow that helped the Giants even the series and end an 0-3 home slide in the postseason when he singled home two runs in San Francisco’s four-run fourth inning.

His sliding stops were part of a spectacular defensive effort that backed Barry Zito in San Francisco’s 5-0 Game 5 victory.

He also delivered a two-out, two-run double to highlight a four-run second inning of the Game 6 win. And even in the Game 1 loss, Scutaro’s single to left leading off the fourth was San Francisco’s first hit off 18-game winner Lance Lynn.

No matter what happens now, he will always be remembered in San Francisco.

“I kind of thought I had a really good opportunity to make the playoffs with this team,” Scutaro said. “We just started playing good, and here we are in the World Series.”