Ads of the year earn their awards

Ads of the year earn their awards 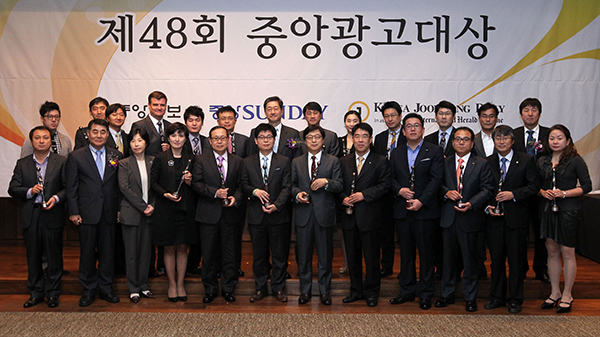 Winners of the 48th JoongAng Advertising Awards pose with Lee Myoung-chun, a professor of advertising and public relations at Chung-Ang University, second from left in the first row, and Song Pil-ho, president of the JoongAng Media Network, center in second row, at the Shilla Hotel in Jangchung-dong, central Seoul, yesterday. By Kim Do-hoon


The best newspaper advertisements of the past year were recognized yesterday at a ceremony marking the 48th JoongAng Advertising Awards at the Shilla Hotel in Jangchung-dong, central Seoul.

Over 100 leading and up-and-coming professionals in the world of print advertising, from agencies to their corporate clients, packed the seats to celebrate a string of the latest innovations in the realm of newspaper ads.

“Since 2005, the judging criteria for the awards were improved to emphasize fairness above all else,” said Lee Myoung-chun, a professor of advertising and public relations at Chung-Ang University. Lee headed the panel of nine judges.

“I believe the corporate message, its creative vision and the targeted English-language-newspaper readership have resulted in winning the grand prize,” said Shin Mu-chol, managing vice president of corporate communications at Korean Air.

Renault Samsung also explained that the ad’s message, which was consumers’ satisfaction with the company’s new sound system and interior designs, differentiates it from other automobile companies.