BEIJING - Beijing Hyundai, the Chinese unit of Hyundai Motor Group, enjoyed what is known in idiomatic Mandarin as shuangxilinmen, or “a double blessing knocking on the door,” last Friday: It learned that it had beaten its Japanese rivals in monthly sales, and celebrated its 10th anniversary in the world’s biggest car market.

The company set a new sales record in September as it enjoyed unsolicited gains from the recent territorial dispute between China and Japan that sparked anti-Japan sentiment and boycotts against Japanese products in the country.

Part of its success is also attributable to the company’s efforts to make its third plant on the mainland its fastest and cleanest in China. For the next decade, the facility will be responsible for producing the Yuedong (known in Korea as the Avante HD) and Langdong (Avante MD), the brand’s most popular models among Chinese consumers.

At the plant in Shunyi District, northeast Beijing, almost 300 robots work silently around the clock whipping metal body parts into car chassis that are soon recognizable as Langdongs. They execute movements with mathematical precision in the blink of an eye, getting the product ready for a market that Hyundai intends to take a bigger bite out of with each passing year.

“This plant represents everything that Hyundai has learned in its 10 years of running automobile plants in China,” said Oh Seok-gu, the factory’s managing director. “Errors and problems found at the first two plants have been corrected and are nowhere to be seen at the latest facility.”

He said the facility can “probably manufacture the largest number of cars at the fastest rate in China,” adding that “many industry officials have asked if they can pop by to benchmark our noise control system, eco-friendly measures and production speed.”

With the new plant having opened in July, Beijing Hyundai, created in 2002, has finally reached annual production capacity of one million units in China. The first two factories can churn out 300,000 units each, with the third currently keeping pace but set to expand by one-third later this year. 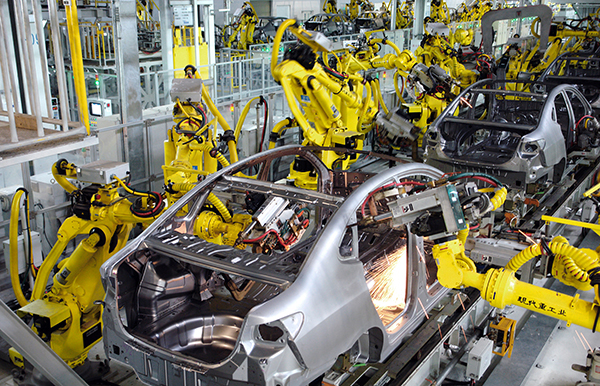 The company saw its China sales accelerate in the past month with the launch of the Langdong, which sold 26,856 units in its first 40 days.

This puts it way ahead of Toyota Motor, which saw its September sales in China drop 48.9 percent on-year to 44,100, according to the China Printed Circuit Association. Honda Motor also reported that its monthly sales dropped 40.5 percent on-year to 33,931 units in the same month.

However, according to Baek Hyo-heum, CEO of Beijing Hyundai, the company “should not let down its guard” because its rivals tend to step up their game as Hyundai expands its presence there.

“We can say we’ve settled into this market after 10 years, but the record September sales partly came from the latest territorial dispute between China and Japan,” Baek said at a press conference held at the headquarters of Beijing Hyundai on Monday.

“Rather than relying on such unexpected help, Beijing Hyundai will brace itself to take a pioneering role by moving into West China, targeting local consumers who are likely to change their cars after making their first purchases seven years ago,” Baek said. “It may be possible for us, if we cooperate fully with Kia, to claim second place in terms of market share.”

As of last year, Hyundai and Kia ranked third with combined sales of 1.17 million units, trailing leader Volkswagen with 2.19 million and General Motors with 1.2 million. For this year, Hyundai-Kia have sold 930,000 units as of September.

The Korean automotive group accounts for about 10 percent of the Chinese auto market. In China, annual demand currently stands at around 11 million units and is expected to reach 19 million by 2016.

Beijing Hyundai now plans to focus on medium-size cities in western provinces, an area Beijing is pushing to promote and luring companies away from the east coast with attractive incentives. The automaker has signed 16 contracts with local dealers in Sichuan, Gansu, Shanxi and Xinjiang this year. It is also preparing various financial programs, including card installment plans with the help of Hyundai Capital, for consumers whose purchasing power is weaker than those in bigger cities like Beijing and Shanghai. 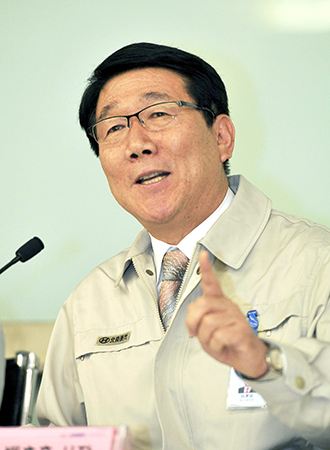 The Chinese economy and auto market are both forecast to maintain annual growth of between 6 to 8 percent for the next few years, according to global investors. However, competition is also rising among global automakers like Volkswagen, GM and Toyota, all of which are eager to expand production capacity to capture a generation of consumers who will soon be shopping for their second car.

Baek acknowledged that Hyundai is less competitive in the premium sedan market than its foreign rivals.

“It is true that Hyundai has been focused on selling small and economical models in China,” he said. “But we have been enhancing efforts to boost sales of medium-size and premium sedans since 2010, and our efforts are paying off.”

According to the company, SUVs accounted for 36 percent of its China sales last year, up from 15 percent in 2009. Hyundai has already sold 73,262 YF Sonatas, its most popular sedan in China, this year.

“Since entering the Chinese market in 2002, Hyundai Motor has improved its image from a producer of economical family sedans to one that makes premium sedans. As we launched the Yuedong, Tucson IX and Sonata, the overall brand image has been elevated,” he said.

He added that, “because our image is not as luxurious as other foreign brands, we are redoubling our marketing efforts to boost our image.”

With the aim of upgrading its premium image, the Beijing branch is on track to start producing the Santa Fe SUV at the new plant from December.

Despite an anticipated slowdown in the coming years, Beijing Hyundai believes the market still has great potential as new Chinese leadership this year is likely to adopt economic measures to boost domestic consumption. “The next three to five years will be a test period for Hyundai to see whether it can survive in the Chinese market or not,” said Ryu Ki-cheon, an executive at the automaker’s research center.