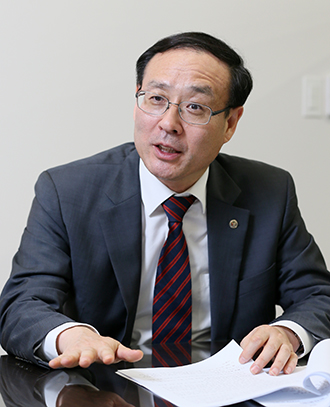 Oh Se-jung, President of the Institute for Basic Science at the International Science Business Belt

Oh Se-jung, president of the Institute for Basic Science (IBS) at the International Science Business Belt, seemed bitter after the announcement of the Nobel Prizes in science two weeks ago. “I hope I get to be interviewed one day about the first Korean Nobel laureate,” said Oh, who was appointed head of the country’s science research center last November.

The International Science Business Belt is a national project by President Lee Myung-bak tasked with accelerating the country’s advancement via new scientific breakthroughs. The IBS, based in the Daedeok Research Complex in Daejeon, is a think tank given the goal of bringing the first Nobel Prize to the country. The institute provides funds of about 10 billion won ($9.06 million) for selected scientists every year.

On Oct. 11, the California Institute of Technology and Korea’s Gwangju Institute of Science and Technology signed a memorandum of understanding to launch an exchange program for professors and students. “Caltech has only agreed on such exchanges with four universities,” Oh said. “This indicates how Korea’s scientific capability has now reached a high level, meaning it is not unrealistic for us to expect a Nobel Prize fairly soon.”

Oh sat down with the JoongAng Sunday to talk about the country’s latest scientific developments.

Q. What did you think when you heard about this year’s Nobel Prize winners for science?

A. A Nobel Prize is granted to a person who discovers something entirely new or who significantly contributes to society. An interesting fact about the prize is that it is usually only awarded when a researcher passes 60, even if what he accomplished occurred during his 30s or 40s. However, Yamanaka Shinya, a 50-year-old Japanese professor, and John Bertrand Gurdon, 79-year-old British biologist, received the Nobel Prizes in physiology and medicine for their research on induced pluripotent stem cells, which was completed in 2006. It took just six years for them to get the prize. This is very encouraging for us, as we are relative latecomers to the field with a short history of modern scientific endeavors.

Isn’t Korea a leading player in the field of stem cell research?

Korea ranks among the world’s top 10 in stem cell research. But there is still a wide gap between Korea and advanced countries that are eligible for the Nobel Prize. For example, Korea has received approval for 19 papers on induced pluripotent stem cells from the Science Citation Index since 2001, while Japan has had 110 papers approved over the same period. For adult stem cells, Korea has 1,178 approved SCI papers, while the top stem cell country, the U.S., has had 10,818.

What is the most pressing task for Korea to raise its first prize winner?

About 98 percent of government-backed science projects are completed successfully. This sounds impressive, but it isn’t. What it actually means is that Korean scientists choose projects that are highly likely to succeed. When they fail at state-supported projects, they have to return their research funds, or they are allowed to participate in any further projects. Because of this, researchers tend to avoid the risk of failure and go for relatively easy projects. I remember Theodor W. Hansch, winner of the Nobel Prize for physics in 2005, saying that he tells Ph.D. students to get opinions from experts about the subjects of their research. If experts say it’s a good idea, Hansch tells students not to proceed any further. When they call it impossible, the German physician tells them to pursue the project. It is perfectly OK to fail at a difficult project, as we can learn a lot even from our mistakes. The first airplane was invented when everybody was thinking about how to make a man fly.

Is Korea too focused on applied science?

Governments of advanced countries evenly split their budgets between basic and applied sciences. Korea traditionally allocates 80 percent of its total budget to the latter, but the current administration has adjusted the ratio slightly to 70:30. I believe that even a supposedly “stupid” scientist can change the world. The late Cardinal Kim Soo-hwan, who we believe changed our society, described himself in this way. Koshiba Masatoshi, winner of the Nobel physics prize in 2002 for research on neutrinos [or subatomic particles], graduated from Tokyo University with the lowest score. Korean scientists are pretty much swayed by prevailing trends. Rather than focusing on one or two big projects, they spread their capabilities too thinly among more trivial subjects, thus increasing the rate of inefficiency.

What can we expect from the IBS?

Japan was once criticized for being an “economic animal” when it was going through a strong growth period. This is because it was preoccupied with using scientific assets developed by Western countries over a period of about 50 years just to make money, rather than working to accumulate new assets. Korean scientists must think about this. Basic science is not just about engineering and technology, but also about culture and ethnicity. In the modern era of smartphones, Korea has surprisingly caught up with Apple and its iPhone.

But we have to be able to make devices like this from scratch, based purely on our own ideas. This is why we need to enhance our abilities in basic science, which is the prime mission of the IBS.

When do you think Korea can expect its first Nobel prize?

I remember appearing on a TV show about the Nobel Prize in 1985 and saying that it was impossible for Korea to win the award given that state research funds were small and research infrastructure was poor. However, the situation has now changed. We have got to a much higher level in many areas. I strongly believe we’ll get our first Nobel Prize within the next decade. The situation we’re in is like a pot of water that is about to reach boiling point. And once we get the first one, a second and third will follow.