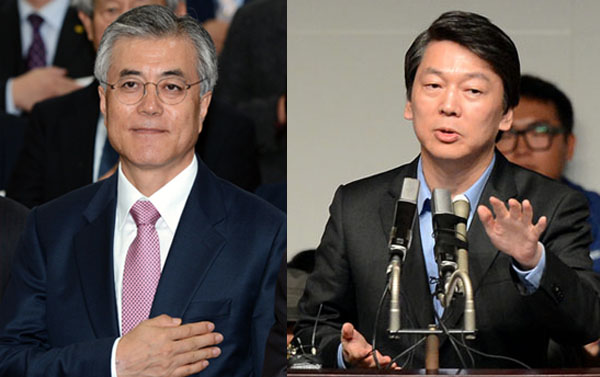 Ahn Cheol-soo, a businessman-turned-politician running for the presidency as an independent outsider, made three proposals yesterday to curtail privileges of lawmakers and political parties to clean up politics in Korea.

In a lecture at Inha University, Ahn yesterday asked the ruling and opposition parties to agree with his proposals. Ahn, who has remained independent despite repeated invitations by the opposition Democratic United Party to join, has based his candidacy on a rejection of business-as-usual politics.

“The number of lawmakers was originally 200,” Ahn said. “But the legislature gradually grew, and now it has 300. The politicians should demonstrate their will for reform by cutting that number, sharing hardships [with the public] and increasing efficiency.”

Ahn criticized the Assembly for failing to pass laws that help the people economically. “I want to ask them if they really have the determination to fulfill their duty,” Ahn said.

As the number of elected lawmakers are cut, the legislature needs to increase the ratio of proportional representatives, Ahn said, to ensure a voice for various segments of society and minorities. He said the parties receive overly generous state subsidies. “After the Chun Doo Hwan regime gained power through a military coup, it started paying off opposition parties with subsidies,” Ahn said. “Politicians must voluntarily reduce those funds and use the money saved for policy development or other urgent livelihood needs.”

Ahn also said parties must carry out structural reform by scrapping their centralized party systems. He said that will root out factionalism and allow a party to focus more on legislative activities.

The independent also said his ideas could be implemented immediately if the ruling and opposition parties agreed with them.

During the lecture, Ahn also expressed his disappointment with reform of the ruling Saenuri Party.

“I clearly oppose not only its political expansion, but also another presidential victory for its candidate,” he said. Ahn went on to criticize the DUP. “It is also wrong for them to say they want power just because they oppose the ruling party.”

It remains to be seen if the independent, whose campaign includes a single sitting lawmaker, will be able to realize such reform. Ahn’s rivals constantly point out that without the backing of a major political party, he is destined to fail as president should he win the election.

Some local media reported earlier this week that Ahn plans to create a new political party after the presidential election, but Ahn’s spokesman Yoo Min-young flatly denied there was such a discussion.

Ahn’s ideas for political reform were similar to pledges presented on Monday by Moon Jae-in, presidential candidate of the DUP.

After key associates stepped down from his campaign, Moon took another step to demonstrate his will for reform by promising to give up the party’s time-honored privileges.

Political reform of the DUP was a precondition Ahn set for any negotiations to merge his campaign with Moon’s in order to field a single liberal candidate in the Dec. 19 presidential election.

Moon also promised to give the public nomination rights in picking candidates, admitting that his party’s nomination process - including a public primary and mobile voting - had shortcomings.

The DUP candidate also yesterday made a stronger pledge of prosecutorial reform.

“The mighty prosecution has joined hands with the politicians and monopolized politics,” Moon said. “I promise to remove the investigative power from the Central Investigation Unit.”

The elite team of investigators at the Supreme Prosecutors’ Office is supervised directly by the prosecutor general, and it handles high-profile corruption cases.

It appeared that Moon was accelerating his political reform with an aim to take the higher ground from Ahn. The Moon campaign also reacted icily to Ahn’s proposals yesterday.

“We understand that he had thought about this,” said Park Kwang-on, a spokesman of Moon’s campaign, “but what he proposed requires a responsible discussion.”