Delegates from member countries pose with President Lee Myung-bak, center, at the inauguration of the Global Green Growth Institute in Seoul, yesterday. The Seoul-based think tank was set up in 2010 to promote the environment. [YONHAP]

The Global Green Growth Institute yesterday held an inauguration ceremony with representatives of its 18 member countries.

Started originally as a nonprofit foundation in June 2010 by the Lee Myung-bak government, it became an international organization after two years and four months. 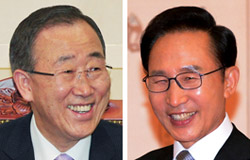 About 300 guests attended the ceremony at the Shilla Hotel in central Seoul, and President Lee gave a speech. Delegates from 18 countries also held an inaugural board meeting and completed the organizational structure.

It is the first international organization established by Korea, and its secretariat is located in Seoul. While Seoul is the home of the International Vaccine Institute, it was created in 1997 by the United Nations Development Program.

The GGGI board of directors will have 17 members, including the secretary general and delegates from five donor countries, such as Korea, Denmark and Australia. The institute also has cooperative partnerships with the World Bank, Asian Development Bank, European Bank for Reconstruction and Development, and other international organizations as well as private firms such as the Danfoss and Vestas groups of Denmark and Korea’s Posco.

The institute will carry out projects to support developing countries’ policy making on green growth. It will also carry out research and host an annual Global Green Growth Summit in Korea.

In his speech, Lee praised Korea’s achievement in starting an international organization dedicated to important work. He also presented a vision of creating a “Green Triangle” by establishing cooperative links among the GGGI, the United Nations Green Climate Fund, which recently chose Incheon’s Songdo District as its home base, and the Green Technology Center, established in March inside the state-run Korea Advanced Institute of