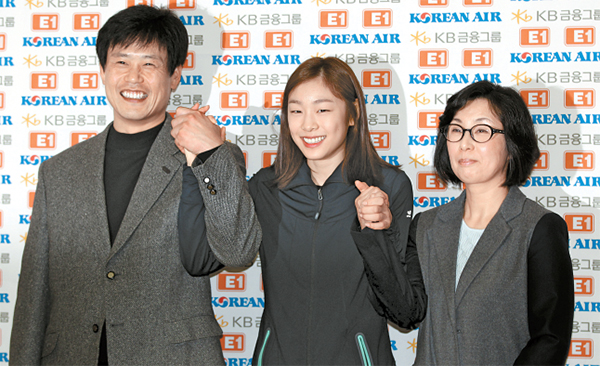 
Korean figure skater Kim Yu-na will be reunited with two of her former coaches this season, her agency here said yesterday, as she attempts to return to competitive skating following more than a year away from the rink.

All That Sports said Shin Hye-sook and Ryu Jong-hyun will train the 22-year-old Olympic champion this season. According to the agency, Shin will oversee Kim’s training programs, while Ryu will handle the skater’s conditioning and fitness training.

Shin, who represented Korea at the 1980 Lake Placid Winter Olympics in figure skating, has been coaching since her retirement in 1984. She coached Kim for about three years, starting when the skater was in fourth grade. Shin has been coaching other national team figure skaters, such as the 2010 Olympian Kwak Min-jung and junior star Kim Hae-jin.

Ryu, a former ice dancer, coached Kim when she was 7.

“The season is already underway and I know it is a bit too late to bring in coaches,” Kim said at a press conference at the National Training Center in Seoul, her practice venue.

“But I am back with coaches who were with me at the beginning of my career. I expect to get a great deal of help from them in training and competitions.”

According to All That Sports, Shin and Ryu have been signed until the end of the ongoing season in March next year, and the decision on naming coaches beyond that will only be reached after the world championships in March.

Kim said she hasn’t thought about coaching changes beyond this season.

With this move, Kim parts ways with her American coach, Peter Oppegard, who has been with the Korean star since October 2010.

Both Shin and Ryu said they were glad to be reunited with their former pupil, who has won an Olympic gold, a world championship and a handful of other international titles.

The two coaches will be tasked with helping Kim, following an extended layoff, return to the dominant form that saw her enjoy five straight podium finishes at the world championships, win three Grand Prix Final titles and capture an Olympic gold medal in record-breaking fashion between 2006 and 2011.

In July this year, Kim announced her plans to return to competition, ending months of speculation about a possible retirement. The 2010 Olympic gold medalist hasn’t skated since the 2011 world championships in April that year and has only appeared in corporate ice shows.

Kim said Wednesday she was “about 70 percent ready,” physically, to compete internationally again.

Kim said she will need to discuss future schedules with her coaches and will finalize her upcoming events sometime next week.

In August this year, Kim unveiled her new programs for the season.