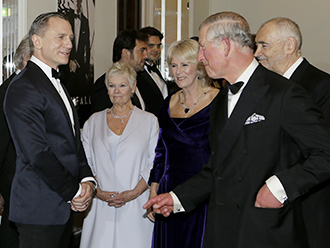 LONDON - Daniel Craig thrilled James Bond fans in London when he stepped onto the red carpet with co-stars Judi Dench and Javier Bardem for the world premiere of the 23rd Bond film, “Skyfall”.

Craig, making his third outing as Bond, said it had been a “real honor” to play the role in the franchise’s 50th anniversary year, as he swept past a giant 007 logo and the secret agent’s favorite Aston Martin.

The rugged Craig stars with Dench, again playing his controller “M,” and the Spaniard Bardem as the spy’s latest nemesis, Raoul Silva.

Critics have declared the 23rd Bond film one of the finest in the British secret agent’s half century on the silver screen.

The prince hailed Bond as “the most famous secret service agent of all time” in a letter included in the screening’s program.

The release of “Skyfall” has special resonance because it is half a century this month since Bond stylishly strode into a film for the first time in “Dr No”.

“It is just a real honor to be part of it and to have a chance to make a movie in this 50th year,” Craig told Sky News on the red carpet. “There is nothing quite like it, but this feels even more special for me than the ones that have gone before.”

“There was lots more to explore - a continuation of what has been happening to us over several years,” Dench said at the premiere. “I boss him about all the time.”