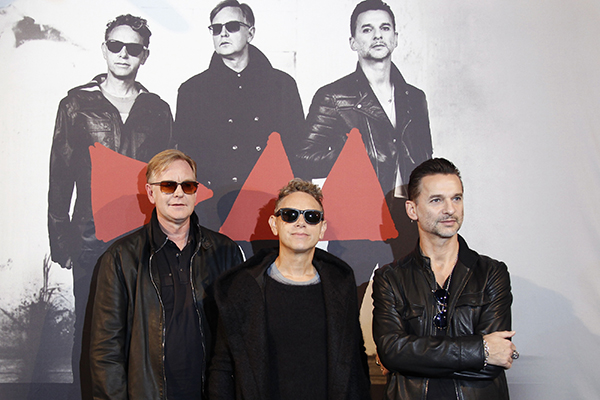 PARIS - Depeche Mode, the British synthpop pioneers whose hits “People Are People” and “Master and Servant” cemented their status in 1980s New Wave and beyond, are planning a 2013 worldwide tour to follow the release of a new album. The band, which has sold more than 100 million records since its 1981 debut album, will launch the tour in Tel Aviv on May 7, followed by 34 shows in Europe and a leg in North America.

“To be making music for more than half our lives .?.?. it’s pretty incredible to still be able to do that,” lead singer Dave Gahan told a press conference Tuesday in Paris.

Dressed all in black, the three members of the band - Gahan, Martin Gore and Andy Fletcher - acknowledged their longevity in the music business while making off-hand jokes about their ages, now 50 and 51.

“I’ve got some notes here - memory’s not so good,” quipped Gahan, who made passing references to his past substance abuse problems and the “ups and downs” of the band, which last toured in 2009-10.

“Performing onstage is really what it’s all about these days,” he told the crowd of press and fans. “It’s very different from what it was 20 years ago. You get the energy from the performance.”

Gore, the band’s principal songwriter, revealed little about the upcoming album, their 13th studio album for which Depeche Mode recorded 20 tracks. But he let slip a teaser for fans.

“I think there are three or four songs that are up there with some of the best we’ve ever done,” confessed Gore.

Five of the songs were written by frontman Gahan, whose rich baritone has been the band’s hallmark through the decades.