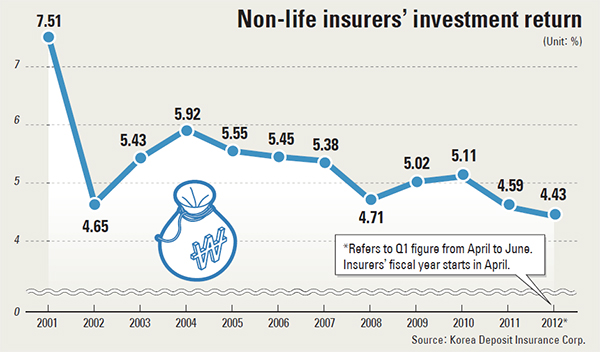 Korea’s nonlife insurance sector is facing a significant setback as its investment returns plummeted to an all-time low in the first quarter of fiscal 2012, industry sources said this week.

According to insurers and the Korea Deposit Insurance Corporation, the average return from Korea’s top 15 nonlife insurance firms in the April-June period stood at 4.43 percent.

This is the lowest figure since the data was first compiled in 2001.

The figure is also lower than life insurers’ record low of 5.1 percent, which they posted in early 2008 when the economy was reeling from the impact of the U.S. subprime mortgage crisis.

The fiscal year for local insurers begins in April.

Hit by a lack of high-yield investments, local nonlife insurers are grappling with a poor economic climate as they struggle to manage their assets, coupled with slowdowns in the real estate and stock markets.

“Values of the industry’s major investment instruments, ranging from bonds and stocks to real estate, have plunged,” said an executive at one of the nonlife insurance firms. “At this pace, some companies are going to see returns from their asset management drop below 4 percent.”

“In the worst case, some nonlife insurers could go bankrupt given that their assets are just one-fifth the size of life insurers’ on average,” said another executive at a nonlife insurance firm. “This means they are much less able to manage risk.”

Green Non-Life Insurance has the worst record at the moment as it is seeing returns of minus 4.44 percent on its investment assets this year.

The country’s ninth-largest nonlife insurer has been suffering from a liquidity crunch.

The Korea Deposit Insurance Corporation will put the ailing company up for tender on Nov. 12 and select a preferred bidder to acquire it.

Market watchers predict nonlife insurers will face losses for this fiscal year due to decreasing returns from the assets they manage.

They are also scheduled to cut their auto insurance premiums next month by an average of 2 percent.