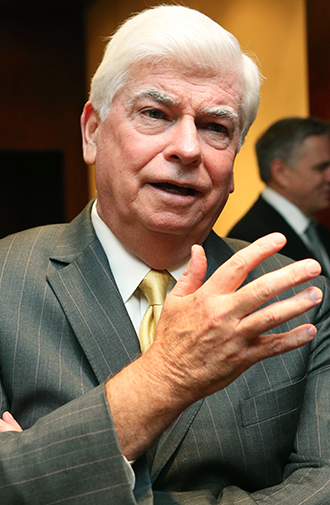 Chris Dodd, the former senator who helped revise an historic bill imposing stricter controls on the U.S. financial industry, said yesterday he remains optimistic the law will survive long into the future.

The Dodd?Frank Wall Street Reform and Consumer Protection Act, which was named after Dodd and Barney Frank, the former chairman of the?House Committee on Financial Services, was designed to improve accountability and transparency in the U.S. financial system and protect consumers from abusive financial practices.

It was drawn up in response to the 2008 subprime mortgage crisis and took effect in 2010.

“Basically, the point of the bill was to end [the idea of being] ‘too big to fail,’?” Dodd said during his speech at an event organized by the American Chamber of Commerce in Korea, or Amcham, yesterday in Seoul.

“[Its fate] will depend on [next month’s] presidential election and I believe that the bill could be revised, but we should never go back to where we were in 2008.”

It includes the now-famous Volcker Rule, which bans proprietary trading by commercial banks.

The law has served as a wake-up call for commercial banks and local investment companies in Korea by raising awareness of the risks of moral hazard.

It has also influenced how they trade derivatives with U.S. firms.

The bill limits major banks from trading using their own accounts, and prevents them becoming overly indebted to hedge funds as it only allows them to spend up to 3 percent of their capital in these and private equity funds.

It also applies to the U.S. branches of Korean banks and restricts large financial-package trades with certain companies there, according to industry insiders.

Local banks have been busy preparing to cope with the bill by changing their data-processing systems and educating employees on the changes, among other measures.

Dodd, who is now representing the Motion Picture Association of America (MPAA) as both its chairman and CEO, said the association and Amcham are ready to help the film industries in both Korea and the United States.

“Helping the entertainment industry means creating jobs, and especially giving more accessibility for less-educated people to get a job,” added Dodd, who was born in Connecticut.

The MPAA operates a program offering grants to promising script writers in Asia. It recently held workshops in association with the Korean Film Council and Korean Academy of Film Arts at the Busan International Film Festival.

“Both countries have world-class content,” said Dodd, referring to film directors like Im Kwon-taek and Kim Ki-duk. “This is leading co-productions between the two countries, and it will continue to [do so].”

However, he stressed that film industry growth should be supported by better protecting copy rights. The former congressman said he discussed the issue with Prime Minister Kim Hwang-sik and officials from the Ministry of Culture, Sports and Tourism on Tuesday.

“No nation will survive and grow without protecting copyrights,” he said.