Google changes name of Dokdo islets on its maps

Google changes name of Dokdo islets on its maps 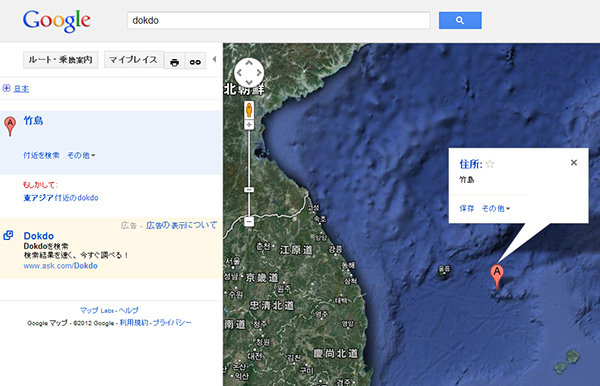 On the Google Japan map site, the Dokdo islets are called “Takeshima,” written in Japanese, when the Korean name is typed in English.[Screen capture]


Google removed the Korean name and address of the Dokdo islets from its English- and Japanese-language maps after criticism from Japan about the American search engine’s previous reference to the disputed islands between Korea and Japan.

Until recently, if a user typed Dokdo in English or Korean on its English map site (maps.google.com), an address appeared, saying the easternmost islets of Korea were located at: 799-800, Dokdo-ri, Ulleung Province.

However, now, the islands are listed as the “Liancourt Rocks” on the English site without any coordinates when Dokdo or Takeshima are searched for. The Franco-English name derives from Le Liancourt, for a French whaling ship which almost shipwrecked on the islets in 1849.

Still, Google’s Korean site (maps.google.co.kr) refers to the islands as “Dokdo” in Korean, with the Korean address as well.

“We’ve made four updates to show more relevant labels to people depending on which local version of our maps they prefer to use,” Lois Kim, Head of Corporate Communications and Public Affairs of Google Korea, said in a statement yesterday.

“We understand that geographic names can raise deep emotions, which is why we have invested so much time to ensure we get the best outcome for our users.

“We made these changes to depict them in a neutral manner as well as improve local relevancy,” Kim said.

Under the new Google maps, each map site labels the disputed islets depending on which country’s map you use. While the Korean site calls the islets Dokdo, the Japanese site (maps.google.co.jp) calls it “Takeshima” without coordinates. That rule applies to three other disputed areas: Senkaku or Diaoyudao, the Persian Gulf or Arabian Gulf and the Sea of Japan or the East Sea.

However, Google Korea told the Korea JoongAng Daily that they didn’t update their map services because of pressure from the Japanese government.

In March, the Japanese central government also said at a Cabinet meeting that they can’t accept Google’s labeling of the islands and demanded Google withdraw its description, because it could make international users think the islands are Korean territory.