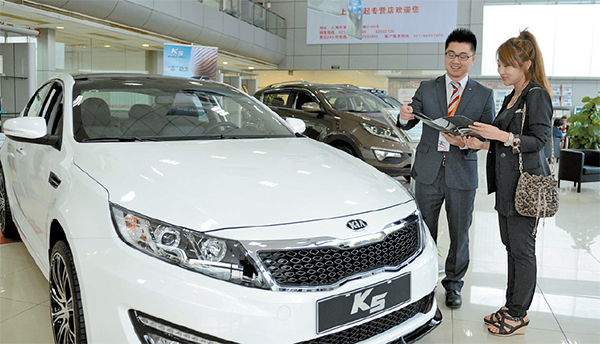 He Ren Zhou, CEO of a dealership for Dongfeng Yueda Kia Motors, left, chats with a customer at his showroom in northwest Shanghai. Provided by the company


SHANGHAI - With its newly released K3, Kia Motors is bracing to stand shoulder-to-shoulder with European and Japanese rivals in China as the Hyundai Motor Group affiliate bids to attract a wave of second-car buyers in the world’s biggest auto market.

“Chinese consumers are giving the K3 a big thumbs-up, describing it as both ‘aggressive’ and ‘elegant,’?” He Ren Zhou, CEO of a Dongfeng Yueda Kia Motors dealership in northwest Shanghai, said this week.

The K3, unveiled two weeks ago in China, is enjoying an unexpected boom from the ongoing territorial dispute between China and Japan over a set of islands, he said. “After making the K3 a big hit, we want to manufacture the K9 at our third plant, which is under construction.”

Kia believes most buyers in China will soon be looking to replace their first-ever car with a second model. As brand loyalty has not yet been firmly established, the automaker has set aims to close the gap with top European carmakers by aggressively promoting its K3.

“Our target base is consumers who currently own a low-grade Volkswagen,” he said, adding that white collars have shown the most interest in the K3 so far, but that “more Chinese who used to ride Japanese cars are increasingly making inquiries about it, especially after the recent territorial dispute.”

The company recently raised its monthly target from 15,000 to 20,000 due to unexpectedly brisk sales, said So Nam-young, CEO of China unit. 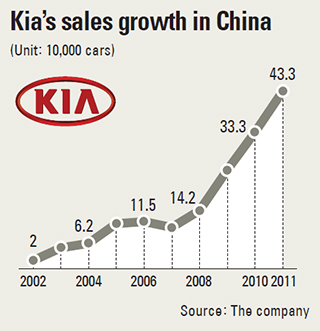 “We’ve been shifting our image from a carmaker that offers excellent value for money to one that offers great design, under the banner ‘design Kia,’ and I think the hard work has paid off,” he said.

As such, the company redesigned the K3 entirely for the Chinese market to cater more to local tastes. “Chinese people like fancier and bigger cars than Korean drivers,” So said, adding that the gambit has apparently worked.

One noticeable change is the vertical slats on the grille, instead of the honeycomb style used on the K5 in China. LED tail lights have been added and chrome strips attached to the rear air-intake holes, reflecting the Chinese love of luxury, Kia said. The car is 40 millimeters (1.57 inches) higher and 10 millimeters longer than the K3 sold in Korea.

According to He, Chinese consumers have warmly embraced the changes imposed on the car by former Audi designer Peter Schreyer.

Kia is also ramping up its production capacity in China. It currently has two plants that can churn out 440,000 vehicles a year but this number will grow to 740,000 when the third facility in Yancheng is ready.

“If we run all three plants at efficiently at 100 percent capacity, we could even push this up to 800,000 units a year,” So said. “Our foremost goal is to become the No. 7 automaker in the country, and rank alongside Beijing Hyundai in terms of production capacity.”

It ranked eighth by sales volume last year, when it broke into the top 10 for the first time.