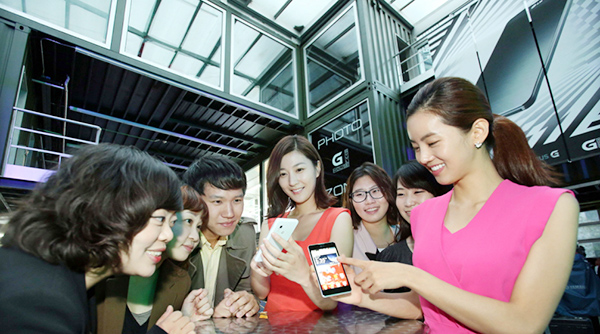 Models show onlookers how to use LG Electronics’ latest smartphone, the Optimus G, at the company’s G Style House, a venue it launched yesterday in southern Seoul to ramp up promotions. The venue will open from 3 p.m. to 11 p.m. every Tuesday to Friday until Nov. 8. [NEWSIS]


LG Electronics swung back into the black in the third quarter after turning around its money-losing smartphone business as it started to play catch-up with Samsung Electronics and Apple.

The company posted a net profit of 157 billion won ($142.4 million) in the three month period ending Sept. 30 to show how it has healed its wounds since posting a net loss of 414 billion won a year earlier, it said yesterday.

The earnings surprise comes after Korea’s second-largest smartphone maker has been struggling to come up with a compelling product to compete with Apple’s iPhone and Samsung Electronics’ Galaxy lineup.

LG posted sales of 12.4 trillion won in the third quarter, down 4 percent on-year. Its operating profit stood at 220.5 billion won over the period, more than reversing a 31.9 billion loss one year ago, it said. Its smartphone division was hailed as its de facto savior.

The division stayed in the red for six straight quarters from April 2010 to September 2011, and sank back there in the second quarter of this year due to increased marketing costs for its smartphone business and intensifying competition from low-end mobile phone makers.

“The TV division managed to keep its Q3 sales on par with last year despite the global downturn, but total sales slipped 4 percent because demand for air conditioners dropped,” the company said in a statement.

“Our mobile communications division, including smartphones, posted an operating profit of 21.5 billion won to recover from the previous year’s loss of 138.8 billion won.” 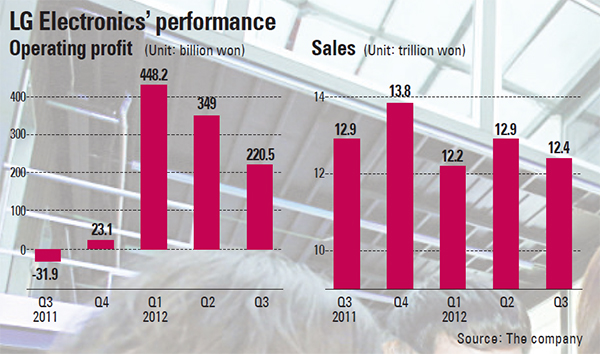 It added that “smartphone sales surged 59 percent on-year as we sold a record 7 million units in the third quarter due to robust demand for the Optimus LTE II, Optimus Vu and L Series models around the world.”

LG said it sold 14.4 million mobile phones in the quarter, up 10 percent on-quarter. Shipments of smartphones that can connect to the latest LTE networks soared 27 percent to 2 million units.

“Demand for smartphones is expected increase in the fourth quarter, which is the peak season, while competition with major handset players grows more fierce as they launch more premium flagship products,” the company said.

“LG Electronics plans to maximize revenue in Q4 with aggressive marketing activities for competitive products such as the Optimus G and Vu.”

Analysts at local brokerages expect LG’s overall performance could improve as demand grows for its high-end smartphones and TVs.

“With Optimus G sales expected to climb, the company is forecast to see a stable profit structure,” said Sophia Kim, an analyst at Woori Investment and Securities. “In terms of sales volume, it will probably ship 9 million smartphones, including 1 million units of the Optimus G, in the fourth quarter.”

“Given that international mobile communication firms will focus on marketing LTE-supported smartphones to expand their LTE service, and ramp up promotions to attract LTE subscribers, LG is likely to enjoy some benefits in 2013,” said John Park, an analyst at ETrade Securities.