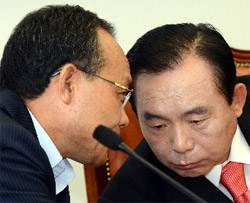 A conservative minority party based in Chungcheong provinces said yesterday that it will join the ruling Saenuri Party’s presidential campaign.

The Advancement and Unification Party, which has four lawmakers in the 300-seat National Assembly, held its Supreme Council meeting and concluded that it wants to join the Saenuri Party’s presidential quest instead of fielding a presidential candidate on its own.

At the meeting, the party also made it official that it would talk about a merger with the largest power inside the legislature. The Saenuri Party currently has 149 lawmakers.

“We worked hard to field a candidate on our own and create alliances with other groups to present a new hope to the people,” Rhee In-je, the chairman of the Advancement and Unification Party. “But I think the time has come for us to give up that effort.”

The Advancement and Unification Party started as the Liberty Forward Party by winning 18 seats in the 2008 legislative election and established its stronghold in Chungcheong.

Its political presence, however, diminished largely as it won only five seats in this year’s legislative election.

The party further dwindled as its political heavyweights left to join the ruling party in August. Representative Lee Myung-soo and Mayor Yoo Han-shik of the Sejong Special Self-Governing City defected to the Saenuri Party, signaling a political realignment ahead of the presidential election.

Chungcheong has swung presidential elections in the past. After scoring victories in the region, Kim Dae-jung and Roh Moo-hyun eventually won the races in 1997 and 2002, respectively.

Although Rhee said the party has not decided whether to merge or to form a coalition with the Saenuri Party, he stressed that the decision of the conservative alliance will be made quickly. “Rhee is thinking more about a merger with the Saenuri Party,” said a party official. “And the plan will be approved at the party meeting before the end of this month.”

The Saenuri Party reacted with cautious optimism. “There is no reason for us to say no to the Advancement and Unification Party’s help whether it will be a merger or a coalition,” Suh Byung-soo, secretary general of the ruling party, was quoted as saying by NEWS1. “It will help us to create a positive mood in the Chungcheong region before the election.”