First lady may be involved in Lee’s retirement home

First lady may be involved in Lee’s retirement home 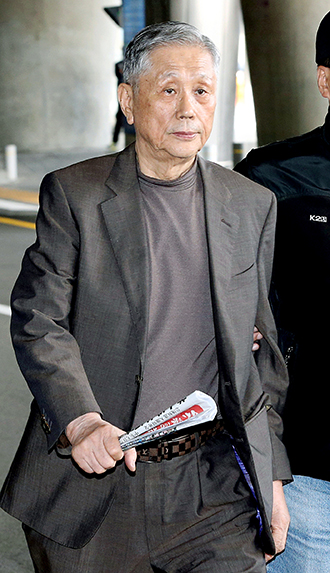 An independent counsel that is investigating President Lee Myung-bak’s retirement home project said there is a possibility that the first lady, Kim Yoon-ok, was involved in the land purchase in Naegok-dong, southern Seoul.

The investigation team said they have secured testimony from Kim Se-wook, 58, a former official of the Blue House, regarding the land purchase.

“The first lady asked to provide documents that are necessary for a mortgage application for the land purchase,” Kim was quoted as saying by the counsel.

Lee Si-hyung, 34, son of President Lee, testified in a written investigation before he appears at the prosecution today, that he prepared the funds in two different ways.

He said that the first lady borrowed the money from the Blue House branch of the Nonghyup Bank by using her 349.6 square meters (4,297.2 square feet) of land in Nonhyeon-dong, southern Seoul, worth about 1.3 billion won, as collateral.

The investigation team said that the first lady asked Kim Paik-joon, a former senior secretary to the president for administrative affairs, to provide necessary documents for the loan.

Kim Se-wook, who testified before the prosecutors, worked under Kim Paik-joon.

The counsel has summoned the head of the Blue House branch of Nonghyup Bank, surnamed Lee, in order to check the loan contract that the bank and the first lady made as well as other bank records. The investigation team also has visited the bank to see the layout of the building and evaluate how it was accessed by customers.

The counsel said the president’s son will appear at their office in Seocho-dong, southern Seoul, this morning. The president’s son has been saying that “he just provided the land money as he was instructed by his father.”

Days earlier, some Korean media reported Si-hyung’s aide told reporters that Si-hyung wasn’t involved in the land purchase but delivered the 600 million won in cash, which he borrowed from his uncle Sang-eun, to the Blue House.

The investigation team said yesterday that they will likely summon the president’s brother soon as he returned from China at 1 p.m. yesterday.

Lee left for China on Oct. 15, a day before the Ministry of Justice banned him from leaving the country.