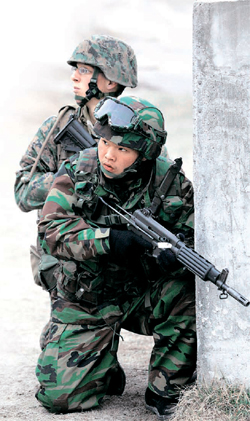 Seoul and Washington reaffirmed the handover of wartime operational control of Korea planned for 2015, at a high-level military talk held yesterday.

At the 36th annual Military Committee Meeting’s video conference, Jung Seung-jo, the chairman of South Korea’s Joint Chiefs of Staff, issued a joint statement with his counterpart Martin Dempsey, in which they “reiterated their commitment to further strengthen the alliance’s deterrent capabilities and discussed issues pertaining to the stable transition of wartime operational control [Opcon] to the Republic of Korea.

“They [the two chairmen] emphasized the agreement reached by the United States and the Republic of Korea governments, and the Opcon transition will be completed by 2015,” the statement reads. “In particular, both chairmen recognized the importance of the certification plan for the theater commands in the aftermath of the Opcon transition and reiterated the certification guidance specified in SA [Strategic Alliance] 2015.”

When the 1950-53 Korean War began, South Korea handed over peacetime and wartime operational control of its soldiers to the U.S.-led United Nations Command, and then to the South Korea-U.S. Combined Forces Command.

In 1994, Seoul regained peacetime control, and the former South Korean President Roh Moo-hyun administration struck a deal with Washington in 2007 that Seoul would command its troops in wartime starting on April 17, 2012. They trumpeted the agreement as a restoration of Korean sovereignty.

With the agreement between President Lee and his U.S. counterpart Barack Obama in 2010, that transfer was pushed back to Dec. 1, 2015.