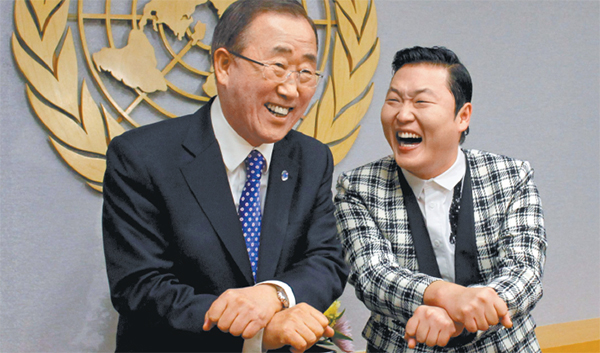 It was hard to tell who was more starstruck when the “Gangnam Style” singer visited the UN headquarters in New York on Tuesday to deliver 7 billion won ($6.3 million) to Unicef on behalf of Asiana Airlines.

“What a big crowd you have,” Ban said to Psy, who was recently named Unicef honorary ambassador. “I’ve never seen this big of a crowd.”

Cameras flashed as the two exchanged greetings in Korean and then in English.

“So now you have the first and second most famous Koreans in the same building,” Psy said as photographers worked to capture the two Koreans who have both made their mark on history; one as an entertainer, the other as a champion of human rights.

After the formalities, Ban confessed, “I’m a bit jealous. Until two days ago someone told me I am the most famous Korean in the world.

“Now I have to relinquish the title to you. But I have no regrets. I sincerely hope that there will be hundreds and many more popular Koreans in the world,” he added.

“I have seen you dance and I hear that you are here to see me dance, but don’t worry, I cannot even imitate your movement. I was watching you teaching all these celebrities.”

Then Psy gave him a personal lesson, much to the amusement of everyone in the room.

After picking up the moves, Ban also took the opportunity to say again that he was proud of Psy and that he had taken time to watch the video and was dumbfounded by the 530 million plus hits that the video had accrued.

Psy said that he was touched by Ban’s recognition.

“Unbelievable. Unbelievable, really. This is a much better feeling than when I hit No. 2 on Billboard,” Psy said.

“For all the Koreans, he is the guy, you know, in everyone’s heart in Korea, the best among the best. To be here and he knows me .?.?. is so touching right now and he’s saying he saw my video, he even counted my video views.”

Ban joked that Psy may be the answer to climate change.

“You are so cool, I hope you can end global warming.”

In terms of energy too, Psy was the proposed solution.

“He’s so energetic, he can help end the energy crisis. He’s like a one-man democracy,” Ban said.