Ulsan gamble paying off with 3-1 win in AFC CL

Ulsan gamble paying off with 3-1 win in AFC CL 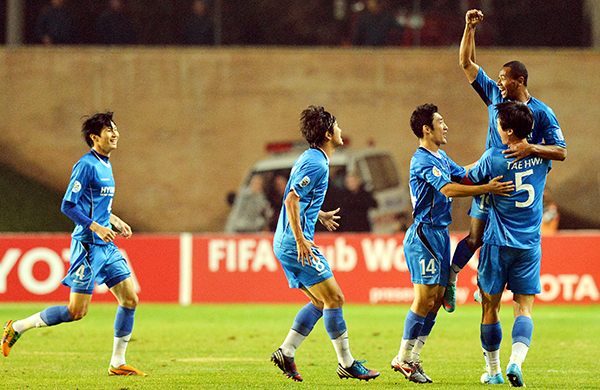 Brazilian striker Rafinha pumps his fist in the air as his Ulsan teammates celebrate after scoring the equalizer in the 31st minute during the first leg match of the AFC Champions League semifinal against Bunyodkor of Uzbekistan in Tashkent, Wednesday. Ulsan won 3-1. [YONHAP]


In the middle of the K-League campaign, Ulsan Hyundai manager Kim Ho-gon made a gutsy call, putting aside the club’s chase for the domestic league title in order to focus on the prestigious Asian Football Confederation Champions League.

The decision had immediate implications in the K-League standings, with Ulsan dropping two spots over two weeks and potentially forfeiting a berth to the 2013 AFC CL. Ulsan is now in fifth in the 16-team league, and only the top three play in the international tournament next year.

But the gamble appears to be paying off. The 2006 AFC CL semifinalists came from behind to down the Bunyodkor 3-1 in Tashkent, Uzbekistan, on Wednesday night during the first leg match of the current semifinals.

Three away goals and a two-goal lead give Ulsan a lot to work with in the second leg, set for next Wednesday at home. If they hang on to the lead, Ulsan, the only Korean club left in the tournament, will advance to its first-ever AFC CL final.

“The players’ resolve and ability to come home with a win was evident on the pitch,” Kim told a post-match press conference.

“We managed to play an aggressive style of football and did not allow the opponents many chances.”

Brazilian striker Rafinha, who exploded with three goals in the quarterfinals, had another shining performance for Hyundai with his equalizer in the 31st minute to offset a fifth-minute strike by Jovlon Ibrokhimov.

National team regulars Kim Shin-wook and Lee Keun-ho extended Ulsan’s lead with the headers in the 53rd and 72nd, respectively. The trio now has 14 goals among them in the tournament, with Rafinha leading with six. Kim scored five while Lee has three.

Midfielder Kim Seung-yong set up both goals in the second half with a well taken corner kick finding Kim Shin-wook and a free kick connecting with Lee.

“I did not expect that we would lose as we started very strongly and we had our chances,” Bunyodkor coach Mirdjalal Kasimov told a media conference. His team blew a chance to cut the deficit after Ulsan defender Kang Min-soo surrendered a penalty kick for a hand ball in the 77th. Jasur Khasanov struck the goalpost.

Ulsan, coming off two straight 3-1 losses in the K-League, will take on the third-placed Suwon Bluewings, who are seven points ahead, on Sunday.

But Ulsan’s focus will remain on the AFC CL. On Saturday, after training in Uzbekistan, the team will travel to Suwon. Coach Kim said he will treat the match as a tune-up for the second leg against Bunyodkor.

“We will look to control the line-up for the game against Suwon with the second leg in mind,” Kim said.