Reflections on the home he never had

Reflections on the home he never had

Photographer Kim Jung Man recreated the works of Belgian surrealist artist Rene Magritte - “The Lovers,” left, and “The Great War,” right - for his latest exhibit. Kim announced in 2006 that he would no longer take commercial photographs, which had brought him fame and fortune, but will explore photography in new way Provided by the organizer


He was once a photographer whom every star in Korea fought to work with. They considered it an honor to be his muse.

But today, he is a very different kind of artist. He asks a tree on a humble dukbang-gil, or road on the bank of a stream, if he has permission to take photos of it. He has done this every day for four years.

What happened to Kim Jung Man? How did one of the hottest photographers in the industry change so drastically?

Kim was born in Korea in 1954 and moved to Burkina Faso in West Africa, where he grew up while his father worked as a doctor. He moved to France and began his career as a photographer in 1975 after studying painting at Ecole Nationale d’Arts Decoratif de Nice.

He was also active at home in Korea, but he was deported from the peninsula - twice. Kim was a French national and held his first exhibition in Korea in 1977 during the Park Chung Hee era. It was illegal for a foreign national to hold an exhibition without prior registration. In the 1970s, Kim’s work and attitude didn’t mesh well with the strict military regime. He was deported to Japan.

Several years later, a dramatic, complicated series of events led to more controversy surrounding the artist. Kim married actress Oh Soo-mee, his second wife, who had two children from an affair with director Shin Sang-ok. Kim took them as his own.

But when Shin Sang-ok and his wife Choi Eun-hee - who were kidnapped and abducted to North Korea in 1978 for the advancement of the film industry under Kim Il Sung - escaped from the North in 1986, the South Korean intelligence officials again deported Kim, this time to the United States. It is unclear how Shin and Choi’s return led to the deportation of Kim, but the photographer says the Park Chung Hee regime used the event as an excuse to oust a unique, French artist.

The second deportation took a major toll on Kim. He began using drugs, was behind bars for two months and was even taken to a mental hospital. He had no love left for his motherland.

But a new Korea gave him another chance after Kim announced in 2006 that he would no longer take commercial photographs. His annual paycheck had decreased from 1.7 billion won ($1.53 million) to just 80 million won.

Institutions like the Korea Tourism Organization and the Cultural Heritage Administration have asked Kim to take photos of traditional Korean culture and scenery. As he was working on the projects, the 58-year-old who had lived his whole life as a “global citizen” got in touch with his roots for the first time.

The Korea JoongAng Daily sat down with the photographer at SangsangMadang in Mapo District, central Seoul, where he is holding an exhibition on Belgian surrealist Rene Magritte (1898-1967), a slight deviation from what he’s been focusing on lately, at the request of Korean fashion brand Louis Quatorze. 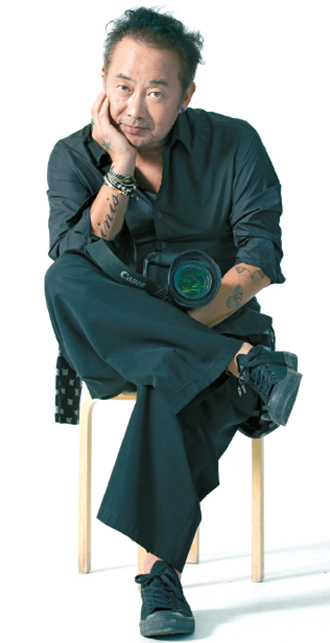 Kim Jung Man poses during an exclusive interview with the Korea JoongAng Daily. He held onto his camera throughout the talk. By Park Sang-moon

Q. It’s been five years since you announced that you would no longer take commercial photographs. What have you been working on?

A. There is a dukbang-gil along the Jungryang Stream that I take every time I go home. It’s a 1.5-kilometer [.93-mile] road and the trees there are often scarred and not well taken care of. I think that is why I took an interest in the road in the first place.

Eight years ago, I felt that one of the trees on that road spoke to me. Since then, every day I ask it, “May I take a photo of you?” For four years I have done that. Only in April of 2008 did it answer me and allow me to take the photos.

I went out every day to take a photo of that tree and the road. I went to the same spot hundreds of times. I did that until June of this year. I looked at the film recently and it turned out that I took 45,000 shots. I told myself, “Gosh, Jung Man, you really are crazy.”

I always felt that the black spot in sumukhwa [traditional ink-and-wash paintings] was missing. But by going out there and taking the photo repeatedly, I finally found that spot. There was also a spot where I hoped a bird would fly to and sit on. Later, it did! Not just once, but five times. I was really grateful. I hope to publish the photos through a foreign publisher soon.

Working with institutions like the Korea Tourism Organization, the Cultural Heritage Administration and the Northeast Asian History Foundation, you’ve been involved in a project dubbed “New Images of Korea,” where you take photos of every corner of Korea including Dokdo, the country’s easternmost islands over which Japan claims sovereignty. Did you find anything new about Korea during your project?

It led me to bloody and brutal self-reflection and examination. I never knew Korea was such a beautiful country. I’ve been to many other countries and often times you have to drive for hours and hours to get to an entirely differently scene. But in Korea, if you drive for just two hours or so, you get different food, different dialect and different architecture.

When we go to third-world countries like the Philippines or Cambodia - especially the rural areas - we look at them with warm hearts, saying to ourselves, “our country was like this, too.” But when we go to the countryside of our nation and see things that are underdeveloped and inconvenient, we tend to criticize and lament. I was like that too.

But I once went to a beautiful village in the southernmost region on the Korean Peninsula and met an old couple. They had cultivated a field their entire lives, supporting their children and hoping for a better life for their kids and their children’s children. It was a humbling scene. But to me, nothing about it was humble. It was such a beautiful scene. I had an epiphany. Such an obvious beauty has never fascinated me. Everyone knows what’s beautiful on the surface. But for me, the fun is finding what’s beautiful on the inside. 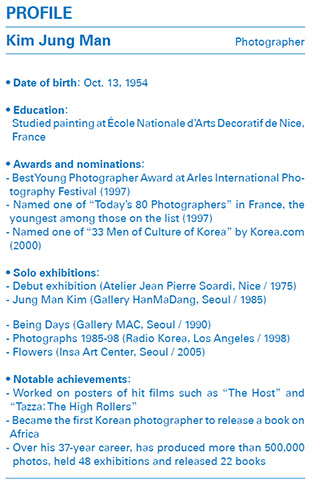 It seems as though you’ve really gotten in touch with your roots since you announced that you would no longer do commercial work. You also mentioned in a press conference that you want to be a photographer who creates sumukhwa with a camera. What is it about sumukhwa that inspires you?

Sumukhwa is the most Asian - the most Korean, I think - form of artwork.

And photography is not about an idea or logic. It’s about emotions and personality. So my goal is to choose the most Asian subject, adopt the most Asian expression and methodology. Of course, I would need technique to complete the work. Because a camera is a machine, you cannot ignore the importance of technique.

I have never really asked myself, “Who are you?” I’ve lived in all kinds of cities. And wherever I was, I fit it. I felt that I was a global citizen or a cosmopolitan.

But as I was working on dukbang-gil, I asked myself, “Who are you?” I guess you could say I fell into an identity crisis in my late 50s. But I am glad I got that chance. And I am glad that my identity [as a Korean] was always there in me. It was just hibernating within me.

I am not undermining the work I did in the past. But back then I was so busy with meeting after meeting. After work, I would just pass out and sleep. Now I have more time to ponder and deliberate. With a quintessential Korean identity and emotion, I want to take photos of a higher degree of completion.

In previous interviews, you often talked about your father, who was a doctor and moved to Africa in the 1960s to work with the underprivileged in the region his whole life. Would you say your father is the biggest influence on who you are today?

Definitely. He was a surgeon, but gave up all the comforts of life and left for Africa. I remember all he had for himself were two suits, two hats, three stethoscopes and a motorcycle. He is the best man that realized altruism, liberalism and idealism that I know of. I am glad that I was his son. I am glad that I even knew him in my life.

Not long before my father passed away, he called me and said, “Son, I have managed to leave just $2,000 for you. Is that alright?” I replied with such a joy. “Yes!” I didn’t have to think twice about it. I was so happy.

When I was young, I hated Africa. There was nothing to do there. And I found it really odd how my parents always had smiles on their faces when they had nothing. I had nothing. But now I understand. Their joy came from curing the sick, from being free of materialism.

Between 2007 and 2010, Kim founded a charity that helped build football pitches for children across Africa. He now envisions constructing art schools on the African continent. Proceeds from his current exhibition at SangsangMadang, “Intellectual Elegance: Thinking about Rene Magritte,” will go to Unicef.