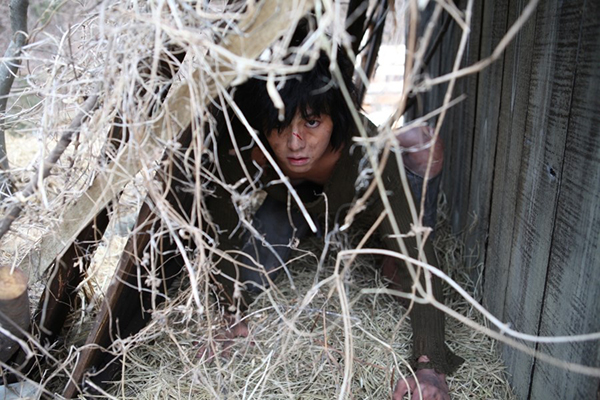 Jo Sung-hee’s new movie portrays a genuine, pure relationship between a werewolf boy and a young girl. Provided by Bidangil


The Korean film scene has largely been dominated by masculine thrillers and gangster movies. But the new film by director Jo Sung-hee offers a refreshingly different slice of the genre by using a character that has never before appeared in Korean cinema: a young werewolf.

“A Werewolf Boy” begins as the elderly Suni (Lee Young-lan ) shares memories from her teen years with her granddaughter, Eun-ju. When she suffered lung problems after her father’s untimely death, the young Suni (Park Bo-young) was sent to the countryside to recuperate, physically and mentally.

One day, Suni encounters a feral boy (Song Joong-ki) of her age in the yard of the house where she is staying. The boy’s body temperature is estimated at 46 degrees Celsius (114.8 Fahrenheit), his blood type unidentifiable and he can neither read nor speak. Although she at first shied away from him, the two gradually become closer as she teaches the werewolf boy to behave like an ordinary person using a dog-training manual.

The plot takes a dark turn, however, when obnoxious landlord Tae-sik (Yoo Yeon-seok) is driven to jealous rage by Suni’s affection for the wild boy.

By contrast, “A Werewolf Boy” should appeal to a wider audience with two of Korea’s most popular young stars in Song Joong-ki and Park Bo-young, a tantalizing love story and timely humor.

The 34-year-old director said he wanted to make “a movie that can be widely watched.”

The presentation of a werewolf boy might remind you of the Hollywood blockbuster “Twilight” series. But “A Werewolf Boy” sympathetically explores a genuine relationship between two teenagers, absent of emotional calculation and self-interest.

“When we were young, our interactions with others were more genuine,” Jo said. “I just wanted to depict that type of relationship.

“I hope viewers will find humanity and warm-hearted feelings that we’ve lost as we aged.”

Fresh as it may be to the viewers, making the movie must have gotten old pretty quick for “Werewolf Boy” Song Joong-ki.

“I don’t really mind eating food that has dropped onto the floor. I also don’t mind moving like a beast. And I don’t pay much attention to my body fatigue,” said Song. “But I was left feeling somewhat lethargic as an actor over the fact that I didn’t have many lines.”

“But I was able to overcome this thanks to Park Bo-young and the director. I was probably too rigid at that time, so my acting looked stiff.”

The actor appears to understand the core role of being more human than animal, more civilized than wild, that the director wanted him to evoke.

“It’s the same as when the werewolf boy was receiving training. I was more focused on the emotional scenes,” said Song.

“I feel that this film is not a horror film, but a sentimental thriller, and it’s more important to bridge the distance between him and Suni.”