A shaky grasp of politics

A shaky grasp of politics 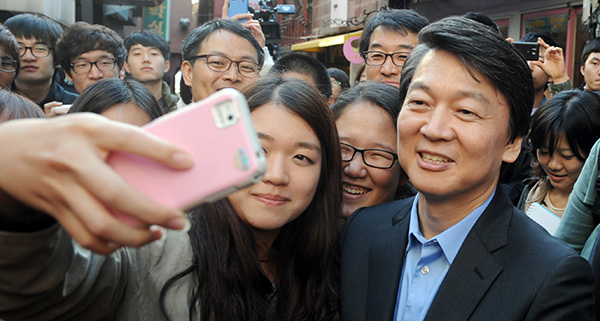 Politics are comprised of activities dealing with various social problems. They are demonstrated in different ways in the case of Korea. Advanced societies like the United States and Japan are also grappling with the same problem. Politics are a topic of concern rather than relief. But the tone and direction of this campaign trail add to our worries.

Software mogul Ahn Cheol-soo has jumped into the presidential race as an independent candidate, carrying a banner of revolution to account for the voices of concern in mainstream politics. His cries may sound a “swan song,” threatening the ears of mainstream and elite politicians.

The legendary mute swan is believed to remain quiet for most of his or her life and sings once in a dying last gasp. From the looks of the approval rating graph on Ahn, the swan-like end may not be entirely legendary. It sings not like a prelude to a reshuffling of the political landscape but its dismantling.

Plural political parties burgeoned amidst the power game among the so-called three Kims - Kim Young-sam, Kim Dae-jung and Kim Jong-pil - who dominated the political scene in the 1980s and 1990s. It was an oligarchic arrangement amid the rapid current of industrialization and democratization.

The framework received challenges from the civilian corner over the last decade. And it now may be near its end with the birth of civilian political contenders amid the rise of the mobile and digital networking age.

If the Ahn Cheol-soo phenomenon heralds the downfall of a traditional political framework, he would have to answer to some serious questions. First of all, can a democratic government work under a president with no party affiliation? And how so?

In any political system, what matters is who is at the top executive post. In this campaign, though, the question would be: Can anyone take that seat? The opposition contenders Ahn and Moon Jae-in of the main opposition Democratic United Party are wrangling over this question.

Ahn’s answer to this question is somewhat worrisome. An aspiring presidential candidate who makes a comment implying disapproval of party politics is not only unrealistic but also dangerous. He believes that if lawmakers are given independence in casting their vote and free from party obligation, “cooperative politics” would be possible. But such belief comes from a sheer ignorance or misunderstanding of the representative democracy.

Classroom democracy would be giving each student a chance to participate in decision-making by casting their vote. But a legislature is different from a classroom. It is impossible to ask the opinions of people for every piece of legislative procedure. Instead, voters elect representatives to the legislature. Voters do not cast their ballot entirely based on the individual but after comparing the platforms of the parties the candidates represent.

If a lawmaker acts entirely on his or her conscience and beliefs rather than party policies and principles, it would be an anti-democratic act of betrayal against those who voted for him or her.

His promise of strengthening direct democracy through revamping the nominating process also raises questions. The current party system is in serious paradox. Despite increased civilian participation in politics, political apathy and distrust has only grown.

His proposal of expanding open primaries to allow voters to directly select candidates to run elections could help self-contradictory fallacies of party politics.

But downsides and risks are equally great. The direct primary system adopted by the United States to increase voters’ say in party choices of candidates ended up strengthening and expanding the influence of party heavyweights.

The irregularities committed during the last open primaries in the opposition parties by manipulating mobile phone and Internet-based votes are also part of the negative residual effects.

What’s most worrisome is his belief that reinforcing direct democracy could solve the problems of an omnipotent rule. But direct democracy can breed domineering rule. Past presidents have often exploited the direct vote to push their policies when the opposition dominated the majority seat in the legislature.

Under the pretext of “for the people,” presidents bypassed party or legislative consensus and directly pleaded for public support. In such cases, the legislature would lose authority to check the abuse of power by the president. As a result, we have an almighty president.

The prophecies in the end helped to generate changes and reforms in parties. Ahn’s premonition on party politics may or may not be fulfilled. It all depends on the election outcome.

* The author is a political science professor of Seoul National University.