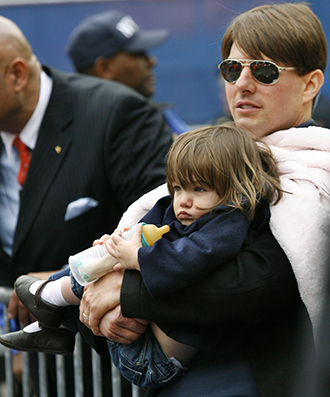 Tom Cruise is suing the publishers of U.S. magazine Life and Style for $50 million over a cover story claiming he had abandoned his daughter Suri, his lawyer said Wednesday.

The weekly’s July 30 issue featured the headline “Suri in tears, abandoned by her dad,” over a picture of the sobbing 6-year-old who lives with her mother, Katie Holmes.

“Tom is a caring father who dearly loves Suri. She’s a vital part of his life and always will be. To say he has ‘abandoned’ her is a vicious lie,” Fields said. “To say it in lurid headlines with a tearful picture of Suri is reprehensible.”

In the lawsuit, a copy of which was obtained by celebrity news Web site TMZ, Cruise’s lawyers note that the story inside the magazine does not repeat the “abandonment” claims set out in the cover headline.

The story explains that in the photo used on the cover, Suri was in tears after being unable to take a puppy home from a pet store, not because her father abandoned her.

But the full story “would not be seen by the vast majority of people who saw the cover,” typically on display at supermarket checkouts, it noted.

Holmes announced June 28 that she was filing for divorce to end her five-year marriage to Cruise, who was reportedly taken completely by surprise.

The couple - who wed in November 2006 after a whirlwind romance and a proposal beneath the Eiffel Tower in Paris - struck a divorce settlement less than two weeks later.

Under its terms, Suri lives in New York with her mother, while Cruise gets extensive rights to visit and spend time with her.

“Tom doesn’t go around suing people. He’s not a litigious guy. But when these sleaze peddlers try to make money with disgusting lies about his relationship with his child, you bet he’s going to sue,” he said. “These serial defamers are foreign-owned companies with their global headquarters in Hamburg. They take money from unsuspecting Americans by selling their malicious garbage.

“Having to pay a libel judgment may slow them down. Tom will undoubtedly give the money to charity. He always has,” he added.