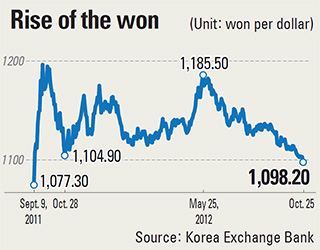 The won hit a 13-month high against the dollar yesterday to breach the 1,100 won mark thanks to increasing dollar sales by exporters and abundant foreign capital inflows.

This is the first time in 13 months that the won dipped below the 1,100 won mark after it closed at 1,077.3 won against the greenback on Sept. 9, 2011, according to dealers at the foreign exchange market.

“The 1,100-something won level against the dollar, which was deemed the floor, has cracked in reflection of the fundamentals of the Korean economy,” said Jung Young-shik, a senior research fellow at the Samsung Economic Research Institute.

“At this pace, the won is likely to remain strong against the dollar,” Jung added.

Kim Yu-mi, a 56-year-old homemaker in Dogok-dong, southern Seoul, had fretted about the depreciation of the won against the dollar when the local currency hit a record low of 1,185.5 won on May 25. Kim’s son is studying at a graduate school in the United States, and she has to send him money for expenses.

She doesn’t know whether to buy dollars now.

“I wonder whether I should wait because there’s still the ample possibility that it will surge again,” Kim said.

“The fast appreciation of the won is attributed to a persistently high current account surplus and an increase in foreign fund inflows into the country in light of the abundance of liquidity generated by the U.S. Federal Reserve’s quantitative easing and the European Central Bank’s bond buying program,” a banker said.

Meanwhile, a survey by the Korea Chamber of Commerce & Industry released yesterday showed 52.6 percent of 160 Korean exporters said they were hurt by the local currency’s surge against the dollar.